Trending
You are at:Home»News»Business»12 Things Every Investor Should Know

Transition requires money, and when it comes to managing and investing money, fortune favors the well-informed. People who are knowledgeable about investing have a major advantage over those who aren’t when it comes to keeping money and using it to earn more. People who keep their money in a savings account (or a pile of cash somewhere) are often unaware of how much it could be growing. They end up with thousands less than had they been well-informed.

In this article I list 12 things everyone should know while investing, learned during my lifetime as an investor and from teaching personal financial management. Unfortunately, investing is complicated, but most people can understand the basics when clearly explained. The consequences of lack of money knowledge are expensive, and you can’t afford to be uninformed.

(Caution: Nothing in this article should be construed as investment advice. The sole purpose is to educate and inform. The author and this website accept no responsibility for the outcome of any specific investment program.)

1. Investing is for everyone

We tend to think of investing as something for the greedy; people who can’t leave well enough alone, and want even more money than they have. Unfortunately, in the modern world inflation is a fact. Prices are continually rising, meaning saved money buys less and less. That means unless you find a way to grow your money faster than prices rise, you are losing money by not investing.

Investing has taken on a mystical aura. We figure successful investors know something we don’t. In fact the opposite is true. Successful investors do not try to capitalize on their knowledge. They use strategies that do not require them to know any more than others.

For this reason, buying large numbers of shares of some investment because of a tip from a friend or a hunch, or investing heavily in some sector of the market because it’s about to take off, are probably not winning investment strategies. You’ll hear a lot of stories of people who got rich that way. No one will tell you the story of how they lost a bundle.

People often hear and use words they don’t fully understand. Here are words that every investor should know.

Stocks – Owning stock means owning a portion of a company’s profit. For example someone owning 1% of a company’s stock is entitled to 1% of all the profits made by that company released to stockholders. Stocks are usually divided into growth stocks, that don’t earn much profit but are 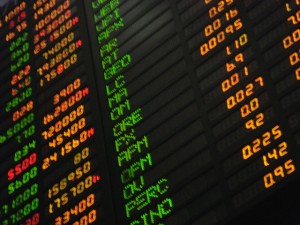 expected to grow and be worth more in the future, and value stocks, that are not held for their growth potential but instead for the profits they generate.  Profits generated from stocks are called dividends. Stocks are sometimes called equities.

Bonds – A bond is a record of a loan, in which the borrower is contracted to pay the lender – the owner of the bond – back with interest. Bonds have ratings which are intended as an indicator of how likely the borrower will default, meaning fail to pay back the loan. Higher rated bonds are thought less likely to default. Bonds are sometimes called notes or paper.

Mutual Fund – This is a pool of investments. Owners of shares in a mutual fund are given ownership of a small piece of each investment in the fund. A mutual fund can deal with a single asset class (for example Large-cap stocks only) or sector (for example a fund containing only communication stocks), or it can have a variety. Mutual funds have a written objective that spells out what types of investments the mutual fund is expected to hold. Like stocks, mutual funds go up and down in value and pay dividends. Mutual funds collect fees which can be taken from the investments it holds (called no-load or flat load) or paid when shares are bought or sold (called front-end or back-end loads).

Money Market Fund – This is similar to a mutual fund, but the share price is always fixed. In the U.S., it’s normally a dollar. Though the possibility of loss of money still exists, generally money market funds will avoid at all costs any drop in share price and thus are considered much more stable investments.

CD – Or Certificate of Deposit. This is a bond offered by a bank that is insured by the government to make sure that there is no possibility of default.

REIT – Or Real Estate Investment Trust is similar to a mutual fund, but it contains real estate assets, such as rental properties or land under development.

Futures – Investments where the investor guarantees the price of some commodity in the future and will make up the difference between the market price and the guaranteed price. Futures are profitable because investors will normally charge a premium in return for assuming the risk.

Hedge Fund – Similar to a mutual fund, except that the fund manager is liberated from the regulations that normally guide mutual funds. These are usually only for high asset investors since they involve risks that are especially difficult to understand.

Asset Classes – These are the types of investments you can hold. Stocks, bonds, CDs, etc.

Sectors – These are the fields your investments are associated with. Examples, are medical, technology, manufacturing, financial, etc.

Portfolio – The total collection of an individual’s investments.

Index – A number designed to measure how well all the investments in a certain sector or asset class are doing.

Fee – Money paid for an investment that doesn’t get invested, going instead to pay someone involved in arranging the investment.

If you take nothing else away from this article, understand that diversity is the key to successful investing.

No one can predict which investments will do well and which will do badly in the coming year. If there were public knowledge, for example, that a particular company’s stock will grow in value, the price today would reflect that knowledge. People would pay more for it because that expectation would make it more valuable. The higher price would make profits more modest. It’s actually illegal to invest using knowledge that is not public, so it’s highly unlikely that any investor will have more success than another based on knowledge.

Instead, savvy investors don’t try to make predictions. They try for a portfolio that will do well no matter what the future brings. The key to doing this is diversity. Have many different types of investments. If one investment does poorly, it will be offset by other investments that do well.

It’s smart to invest in a variety of asset classes, sectors, and capitalization.

There are two types of people who counsel investors. Some are called fiduciary, meaning they are required to give you the best possible advice, regardless of how profitable it is for them. Advisors that are not fiduciary, may give you advice that is OK for you but not the best possible. They’re entitled to advise you to choose an investment that earns more for them but less for you.

When you choose an investment advisor, ask if they are fiduciary. Those that are will tell you right away. Those that aren’t, may try to hem and haw a bit. If the answer to that question is anything other than a variation on “Certainly!”, another advisor might be better for you.

For me, building a diverse portfolio has required the services of an expert, so it’s important for me to know I’m getting the best advice.

A warning though – a fiduciary advisor will charge you a fee. Other advisors will charge similar fees, but many will try to hide it in sales commissions for investments they buy and sell for you.

Be sure to read the next article in this three part series.