Trending
You are at:Home»Entertainment»Magic: The Gathering’s Transgender Character

Your support makes all of this possible. Please donate or subscribe. We have raised $590.00 so far this month, leaving us $1934.51 below our goal for the month of May! :( 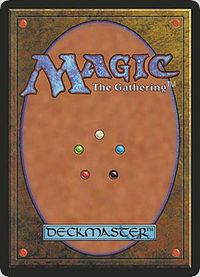 Back of Card Art

Magic, a trading card game by Wizards of the Coast, released its 66th expansion at the end of January . This new expansion titled “Fate Reforged” adds 185 new unique cards to an already extensive game universe. The difference between this set and previous expansions? Fate Reforged features a transgender character.

“Alesha, Who Smiles at Death” has no sign of gender on her card, and listed as a human warrior. Her back story as a transgender woman is revealed in a short story titled “The Truth of Names”, featured on the Wizards of the Coast website.

In the tale, Alesha relived the day she chose her name, as befitting a warrior who had successfully gained victory in battle with her clan, the Mardu. In the culture of her people, individuals take on the names of their ancestors. Yet instead of choosing the name of a father or grandfather, as most expected the assigned male child of 16 years to do, Alesha instead chooses the name of her grandmother. Despite her nervousness as doing so, the response of her clan is acceptance and pride.

Three years later, we find Alesha leading warriors to battle against several dragons and dealing Alesha’s response is to bring down a dragon on her own, while sagely reminding the young warrior that she knows who she is, and he has yet to find his place. She watches him throughout the rest of the battle, and sees his successes lie more in helping others than in leading the charge.

Yet when Alesha circles the battlefield to hear everyone’s tales of valor and victory, the young warrior claims to have none – a claim that Alesha strongly disagrees with having seen him on the field.

His friends immediately speak of his bravery, and though he did not bring down any dragons that day, he had saved many of their people with his strength. The young warrior still offers no name for himself, to which Alesha replies, “I know who I am. I am not a boy. I am Alesha, like my grandmother before me. And I know who you are…you think your deeds are not as glorious as theirs. And you are wrong. When you learn what your place among the Mardu is, then you can choose a name.”

The unnamed warrior stops Alesha before she can leave, and admits that he does have a tale from the battle, though it is not his own. He speaks of seeing her defeat a dragon, and names her “Alesha, Who Smiles at Death”. As before, the warriors of her clan respond with cries of acceptance.

The response of the fan community has been largely than same. Magic: The Gathering has a few characters that don’t confine themselves to traditional gender roles and expressions, but this is the first transgender character on the roster. Fans have made positive responses to the company’s step towards inclusion, and many are expressing excitement that the series is playing host to the first fictional transgender warrior.