Your support makes all of this possible. Please donate or subscribe. We have raised $420.00 so far this month, leaving us $2099.66 below our goal for the month of September! :(

They should make the right one! New legislation trying to stop nationwide marriage equality Cruz’s latest attack on LGBT Americans 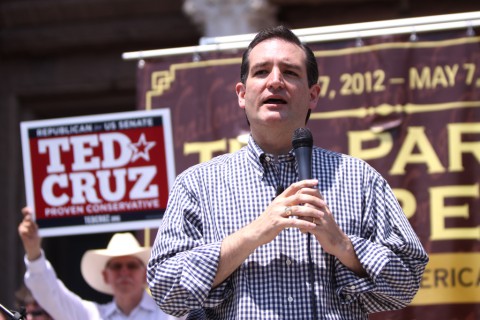 Cruz’s bills as reported by Bloomberg “would establish a constitutional amendment shielding states that define marriage as between one woman and one man from legal action” and “bar federal courts from further weighing in on the marriage issue until such an amendment is adopted.”

Ted Cruz’s latest radical stunt follows his participation at a head-scratching gay reception in his honor in Manhattan.

“Trying to garner support in a field of candidates from the far right, Cruz has no problem using LGBT equality as a wedge issue against fellow Republicans, even as the far majority of Americans strongly support marriage equality. While Cruz is clearly a radical anti-LGBT candidate, the question here is where do his fellow senators stand on these anti-LGBT bills…looking at you Senators Rubio and Paul.”

Cruz’s contempt for LGBT equality certainly can’t be glossed over by attending a bizarre gay Manhattan reception. Whether the issue is marriage or protection from discrimination, Sen. Ted Cruz has consistently opposed equality for LGBT Americans. And he’s gone even further, attacking fellow Republicans for marching in pride parades, and using his opposition to marriage to win his first Senate campaign.

In February, as Ted Cruz began to gear up his 2016 campaign, the HRC released a comprehensive research report that highlighted his record opposing LGBT equality. The research document marked HRC’s first effort to chronicle where potential 2016 presidential candidates stand on LGBT equality.

The document, which is hosted at hrc.org/2016RepublicanFacts, serves as an online resource for documenting the record and rhetoric of potential 2016 GOP presidential candidates, and where they stand on key LGBT issues. Cruz was among the first tier of candidates to be released by HRC.

About the Human Rights Campaign

The Human Rights Campaign is America’s largest civil rights organization working to achieve lesbian, gay, bisexual and transgender equality. HRC envisions a world where LGBT people are embraced as full members of society at home, at work and in every community.