Trending
You are at:Home»Opinion»Commentary»It’s a bit premature for us to celebrate the demise of the Florida Bathroom Bill

Your support makes all of this possible. Please donate or subscribe. We have raised $640.00 so far this month, leaving us $1885.05 below our goal for the month of January! :( 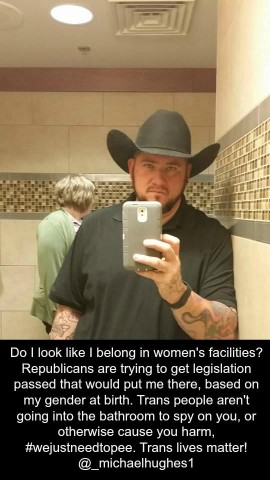 I hate to dampen the party that the transgender community and their allies are throwing over the demise of Florida House Bill 583. That bill gave jail time to anyone using a restroom not matching their sex, and to business owners allowing it.

It was a particularly nasty piece of work that would have split our community between those with the wherewithal to update our documents and those too early in their exploration or lacking the means.This was one bill in one state.

There are no documented cases of a transgender person harassing, or assaulting anyone while using the restroom which is in line with their gender identity; usually they are the victims. However, the forces that seek to use bathroom legislation for their own political gain, aren’t going away or giving up. They’ll adapt.

The next bill will be even harder to defeat, and this one was not a cakewalk. Even in the face of the national #WeJustNeedToPee movement, it won overwhelming support in two committees. We need to pay careful attention to how we approach the next assault on our restroom rights.

To confront the supporters of these bills, we need to understand where they’re coming from. I am troubled at the usual “haters gonna’ hate” reaction from our community. Ultimately stopping the movement toward these restrictions involves educating people about why they are harmful. That, in turn, requires understanding their supporters’ point of view.

What is driving these bills? The Florida bill is in reaction to local equal rights ordinances that allow transgender people to use the restroom corresponding to their gender identity. Conventional wisdom says it’s fear of bathroom predators, of the man who accosts a woman in a restroom and then claims that he is transgender and has a right to be there.

The conventional wisdom also suggests that all we need to do is point out the fact that it simply doesn’t happen, even in places which have already established the right of transgender individuals to use restrooms in line with their gender identity, and where the fears of the supporters of these types of bills have been shown to be unfounded.

Listening to the rhetoric supporting these bills and reading between the lines yields a substantially different narrative. Fear exists that this is the first slide down a slippery slope, ending with societal approval of people using whichever restroom they please.

In that world, preferring to use a restroom exclusive to one’s own gender is seen as outside the mainstream, and hopelessly behind the times. Confronting someone who doesn’t belong and appears to be up to no good is no longer socially acceptable, and doing so is discrimination.

The nightmare scenario those people envision is not the bathroom predator who is, or pretends to be transgender. It’s a world where they can’t even acceptably confront or report someone who is obviously in the wrong restroom for the wrong reasons.

Their fears are that this is an agenda that is being pushed to eliminate single-sex restrooms is not helped by the calls on social media for just that to happen, such as was seen in a recent video by activist and educator Laci Green. There seems to be a groupthink among people who are not transgender, that making all restrooms gender neutral is the best solution.

Perhaps that step is worth debating. Many people wouldn’t mind it. But an awful lot of people would find it very uncomfortable. I fear that possibility is what is scaring people enough to support bills that criminalize bathroom use, which is exactly what these conservative legislators want to do.

Elimination of single-sex restrooms is an agenda being pushed in the name of the transgender community, which is not asking for it. I can’t claim to speak for all my transgender brothers, sisters, and other siblings. But I know that most of them would never dream of telling anyone that they should be forced to use a gender neutral restroom. We just want our own trips to the restroom to be safe and uneventful.

I suggest a strategy where we as a community make it clear, we are NOT asking for the elimination of single-sex restrooms; simply for the ability of people to use  whichever restroom that is in line with their gender presentation, and not based on their birth sex.

We need to make a point of acknowledging just how important single-sex restrooms are to some people. It’s much easier to influence people when they are not irrationally afraid for their own safety.