Trending
You are at:Home»Life»Health»Male to Female Transsexual files suit against Barnes & Noble for Employment Discrimination 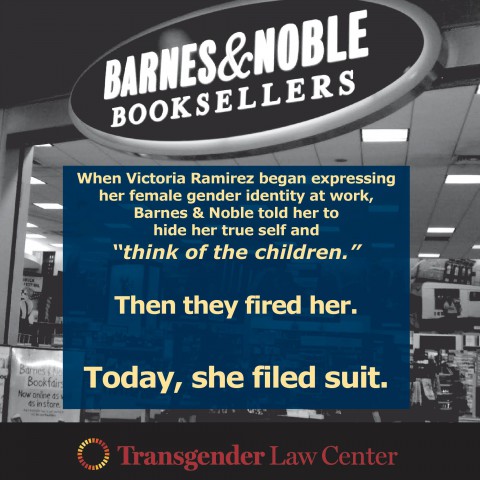 When Ms. Ramirez informed management that she was undergoing a gender transition from male to female, the company responded by prohibiting her from working as a woman and then firing her when she protested.

“I loved my job at Barnes & Noble,” said Victoria Ramirez. “I put myself through college working there. I thought this company shared my values of hard work, integrity, and respect for all people. But when I came out as transgender, they didn’t live up to those values – instead they responded by mocking me and forcing me to hide who I really am. After giving six years of my life to Barnes & Noble, I was devastated when I was fired simply for being myself. I lost my livelihood, my financial stability, and my confidence.”

Barnes & Noble, which for the past seven years has touted its “perfect score” on the Human Rights Campaign’s Corporate Equality Index, subjected Ms. Ramirez to harassment regarding her gender identity and expression.

Her manager berated her about her long hair, makeup, and nail polish, saying her appearance was inappropriate for a “family store” and that she should “think of the children.” When she came out as transgender, managers set impossible conditions for Ms. Ramirez, essentially forbidding her to transition.

They told her she was not allowed to wear women’s clothing, discuss her transition with her co-workers, use female pronouns to identify herself, or use the women’s bathroom.

Overwhelmed by the pressure to hide her female gender identity at work, Ms. Ramirez began to experience on-going panic attacks and severe anxiety. When she told her manager she couldn’t hide who she was any longer, she was fired.

“The law is clear: no one should be targeted for humiliation and harassment at work and ultimately lose their job because of who they are,” said Kris Hayashi, Executive Director of Transgender Law Center. “It’s unacceptable for any employee to go through what Victoria  experienced at Barnes & Noble, and it’s particularly disturbing given the public image the company has cultivated around its support for LGBT people. Unfortunately, this case illustrates the fact that discrimination against transgender employees is still all too common, leading to sky-high rates of unemployment and poverty in our community.”

Title VII, the federal law that prohibits sex discrimination in employment, has been widely interpreted in recent years by courts and federal agencies to protect transgender employees. In  April, the Equal Employment Opportunity Commission issued a landmark decision in Lusardi v. McHugh, a case brought by Transgender Law Center.

That decision held that denying access to restrooms and refusing to use pronouns consistent with the employee’s gender identity constitutes unlawful discrimination. Ms. Ramirez’s suit is brought under California law, which includes an explicit prohibition of discrimination based on gender identity or gender expression.

Barnes & Noble, Inc. will have 30 days to respond after service of the complaint.

About the Transgender Law Center

The Transgender Law Center works to change law, policy, and attitudes so that all people can live safely, authentically, and free from discrimination.

We envision a future where gender self-determination and authentic expression are seen as basic rights and matters of common human dignity.