Trending
You are at:Home»Entertainment»‘Assigned Male’: Humor and Insight While Growing Up Trans

Assigned Male can be described as Janet Mock meets Calvin and Hobbes. The comic strip by Sophie LaBelle, is at times wickedly funny, painfully perceptive, and profound beyond the years of its 27-year old creator, a transgender woman from Montreal, Canada.

The strip follows life through the eyes of a middle schooler who alternately makes light of, and chafes under the realities of growing up a transgender child in a cisgender world.

Assigned Male first flew onto my radar when a Facebook friend whom I met through Susan’s Place shared a three panel cartoon depicting a fictitious news story on a CNN-like channel about student restroom use.

“We asked experts on the subject, who confirmed with us that trans children exist. But is society ready for them?”

I felt myself drawn in helplessly as she battles transphobia among peers, demands acceptance from family members, and shows us everyday events through the frustrated eyes of a girl who is determined to have an ordinary childhood and will accept nothing less from those around her.

I gaped at the screen for a few moments in admiration at so much thought exploding from so few words. The cartoon managed to capture not only the media’s general stance toward us as an object of study subject to the pronouncements of clueless experts, but also the assumption that transgender folks need to temper our expectations to be treated as human beings based on how comfortable people are with our very existence.

I instantly became voracious, I had to have more, and a few clicks brought me to the Assigned Male Tumblr page and into the world of Stephie, Assigned Male’s bold and sagacious protagonist.

I felt myself drawn in helplessly as she battles transphobia among peers, demands acceptance from family members, and shows us everyday events through the frustrated eyes of a girl who is determined to have an ordinary childhood and will accept nothing less from those around her. All three of these are on display in a brilliant exchange with her father that culminates as she responds to his anxieties by assuring him “That’s fine Dad. I’m on Tumblr. I know how to handle things.”

Just as circumspect and affirming are Assigned Male’s memes, lovingly featuring Stephie delivering witticisms that would make Confucius proud. Stephie’s cherubic smile belies a deadly accurate javelin of a tongue that LaBelle uses to skewer both society’s myopic appraisals of transgender people and our own communities unsound assumptions. 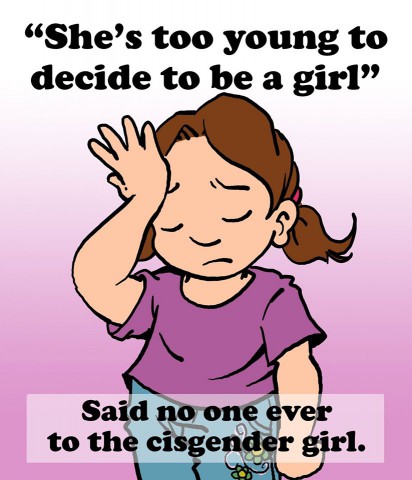 Here she competently schools skeptics of children who know their own gender identity, following it up by taking on the trans communities own preoccupation with passing.

Ms. LaBelle takes pains to show her audience a world where the full rainbow of queer experiences are woven together so realistically, we realize it would be incompletely drawn without them.

Ms. LaBelle takes pains to show her audience a world where the full rainbow of queer experiences are woven together so realistically, we realize it would be incompletely drawn without them. She includes a genderqueer child seeking a non-binary presentation in line with their identity, and others struggling against labels the world insists upon pasting on their experiences. When her mother confesses attraction to another woman, Stephie asks “You’re gonna kiss her. Will that make you a lesbian?”

“No. Still bisexual,” the answer comes back dryly. So much insight packed into the 5-letter word “still”.

What I most admire about Assigned Male is the ability to express painful anger and frustration in a form that comes off purely humorous.

What I most admire about Assigned Male is the ability to express painful anger and frustration in a form that comes off purely humorous.

I would guess she finds it just as maddening and provocative as I do when our bathroom concerns are casually dismissed. It wouldn’t surprise me if these were a subject of many a private rant. But in her strip, a few simple words do the job, as when a friend tells Stephie to “stop saying those horrible things like it’s what you hear on a daily basis.” 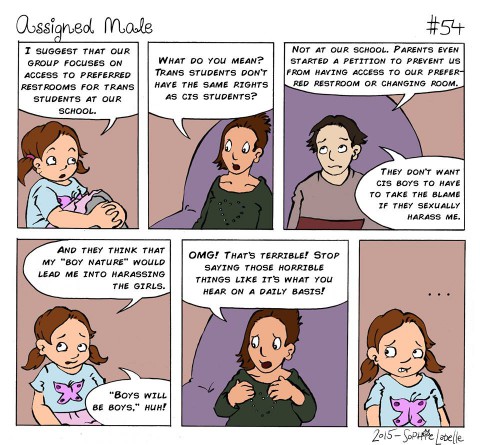 The most emotional moments for me came when Assigned Male chronicles familiar rites of passage. Who hasn’t examined their body hoping for telltale signs that hormone therapy is having it’s desired effect? “It’s just gum,” Stephie declares after initially believing puberty blockers have had an effect on her hair. 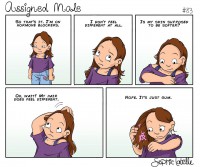 LaBelle also knows how to market her own looks. Her Facebook page is peppered with glamour shots showing her unselfconscious beauty. She knows well that young females are drawn to attractiveness, and uses that fact to give her credibility among her audience.

Her beauty message tends to be affirming — one of her posts extols the virtues of “confidence selfies” — but I wonder whether the ubiquity of her radiant smile potentially weakens her messages about the non-importance of looks and physical presentation.

I sincerely hope LaBelle won’t find herself running short of inspiration or succumb to the temptation to dilute her art in favor of one with a broader appeal. Her likes on Facebook number in the thousands and her message is pretty much guaranteed to melt the heart of anyone who has ever transitioned, thought of transitioning, or loved someone who has.

However, I’m afraid her work would be a hard sell to the mainstream cisgender media whose general simplification of the transgender experience might render Assigned Male’s nuanced observations too subtle for the Garfield and Peanuts crowd.

Still, her memes are high enough quality that the t-shirt and poster sales alone should provide some profit. Even if our small market one day proves insufficient for her substantial talents, we can count ourselves fortunate that she spent the early part of her career entertaining and enlightening the transgender community with the fruits of her creativity.

Her humor and wit provide evidence to back up her heroine’s belief that Trans people are a positive addition to society. 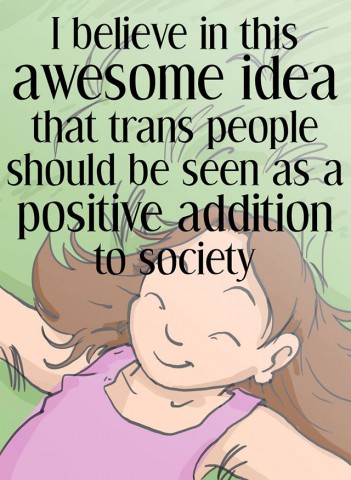