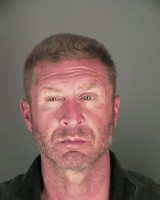 A Boulder, Colorado man is facing hate crime charges after an April attack on a transgender man.

Paul Wettengel, 45, was waiting at a bus stop on 28th street in Boulder on 13 April when he attacked another man after he asked Wettengel for a lighter. The victim, who has not been identified other than his age being given as 21, intervened. Wettengel allegedly punched him in the face whilst yelling transphobic and homophobic slurs. According to police he also grabbed him in the stomach and breasts.

He was arrested that day and charged with third degree assault as well as “bias-motivated crime causing bodily injury”-Colorado’s version of a hate-crime. Police noted that he appeared to be intoxicated and was in possession of a bottle of vodka.

A 2012 report from the National Coalition of Anti-Violence Programs stated that transgender people are far more likely to be victims of assault than non-transgender people. February saw hate-crime charges brought against individuals in Washington, DC and San Fransisco who both stabbed young transgender women aboard public transportation.

There have been several other attacks where a trans-bias was suspected by friends and family of victims in which hate-crime charges have not been filed.