Trending
You are at:Home»Opinion»Commentary»Supreme Court Refuses Kosilek Case: Is That Really a Good Thing?

Your support makes all of this possible. Please donate or subscribe. We have raised $646.91 so far this month, leaving us $1880.78 below our goal for the month of May! :( 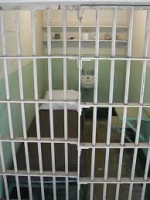 The Washington Blade reports that on Monday, the U.S. Supreme court declined to hear the case of Michelle Kosilek, an inmate who had sued to have her Sex Reassignment Surgery covered by the state of Massachusetts as a medically necessary procedure.

Michelle is serving a life sentence and is required by U.S. law to have her medical care provided by the prison system. According the Blade, she had mutilated herself and twice attempted suicide without the surgery. An appeals court had previously ruled that she is not entitled to the procedure. The basis of that decision was that current medical standards do not mandate such a procedure and that the court should not overrule medical practice.

The Supreme Court’s denial leaves Kosilek without legal options.The lower court decision stands, so the state does not need to provide surgery. She is a prisoner, and therefore cannot change health care providers or go elsewhere, even were she free to choose an occupation paying enough to afford it. In short, she cannot have SRS.

Surprisingly, to me at least, the transgender community is of mixed mind on whether Kosilek should receive her surgery. The National Center for Transgender Equality supported the case against Massachusetts when it went before the First U.S. Circuit Court of Appeals. In their press release, they make the point that “people who are incarcerated and cannot provide for their own care have an unquestionable, constitutional right to adequate medical care.”

However, many transgender people disagree. On this forum, one transgender woman said, “No convicted felon should get a free SRS unless it is also free to all law-abiding transsexual citizens of this country.” “It should not be available to anybody at tax payer’s expense unless it is under a medical insurance program for which the recipient has paid premiums,” said another.

However, many transgender people disagree. On this forum, one transgender woman said, “No convicted felon should get a free SRS unless it is also free to all law-abiding transsexual citizens of this country.” “It should not be available to anybody at tax payer’s expense unless it is under a medical insurance program for which the recipient has paid premiums,” said another.

While no group as large as the American transgender community will ever completely agree on anything, we are shooting ourselves in the collective foot if we don’t vigorously oppose the circuit court’s ruling.

While many see a march of progress inevitably leading to insurance coverage for SRS as a medical necessity, that is far from guaranteed. We could hope doctors finally understand and acknowledge the crushing toll gender dysphoria takes on so many of us but without an outcry from we who really understand, expecting it to happen on its own is, at the very least, optimistic.

Of course it’s only natural to begrudge something we had to earn when someone else received it free, especially if, as in Kosilek’s case, it came from a criminal conviction. It turns our sense of rewards and punishment on its head. As one forum member put it, “This may mean that gender dysphoric people who can’t afford medical treatment and SRS could become criminals and go to prison for treatment.” The feeling is understandable that folks jailed for wrongdoing should wait their turn behind those of us who’ve worked hard for it for years.

But lifesaving medical care is a right in this country, for those in prison and those who aren’t.

Would we deny Kosilek an appendectomy? If she had a life-threatening aneurism, would we deny her surgery to repair it? Clearly those would not be the actions of a humane civilization.

So the questions the courts, and the transgender community needs to answer is this:

Does she need SRS or is it just something that would be nice?

We need to think carefully about the consequences for all of us if there is any answer other than, “Of course she does.”