Your support makes all of this possible. Please donate or subscribe. We have raised $186.74 so far this month, leaving us $2322.68 below our goal for the month of March! :(

If you are one who believes men and women are basically similar — the same product in two different packages, the same merchandise, different displays — you probably won’t think much of this piece. Don’t mistake me — no one should be denied opportunity or be assumed incapable (or capable) of some contribution based on their gender. Gender is an identity, not a box or a prison.

But as a collective, women offer gifts that men do not. The world would be a much poorer place without the female gender (were it livable at all). The major humanitarian and civil rights advances of the past 100 years correspond in time with the enfranchisement of women. That’s no coincidence. That’s why the role models our society advances for its young women trouble me.

In the first movie we are expected to celebrate a character we don’t especially favor, being forced to cut off his own limb to avoid being blown up. In the second movie, we’re to laugh along with ruffians when one of their number permanently severs fingers catching a sharpened boomerang.

I recently listened to Charlize Theron describe her character in the upcoming Mad Max movie. For the uninitiated, Mad Max roams a post apocalyptic desert where laws and government give way to those with the weaponry and savagery to impose their will. All who lack the strength and cunning to resist must obey. The movies are characterized by an almost gleeful admiration for the maiming of the human body. In the first movie we are expected to celebrate a character we don’t especially favor, being forced to cut off his own limb to avoid being blown up. In the second movie, we’re to laugh along with ruffians when one of their number permanently severs fingers catching a sharpened boomerang

The first three movies starred Mel Gibson, him of the rugged good looks and drunken racism and homophobia. This time the producers have decided a woman will deliver their post apocalyptic mayhem. Theron plays Imperator Furiosa, a crew-cut heroine with the toughness, fighting ability, and raw guts to prevail against the worst of the worst that post-civilization humanity has to throw against her.

I have nothing against people, male or female, who enjoy this sort of entertainment. But I have a problem with Theron’s description of her character as “a real woman” in a recent interview on NPR. 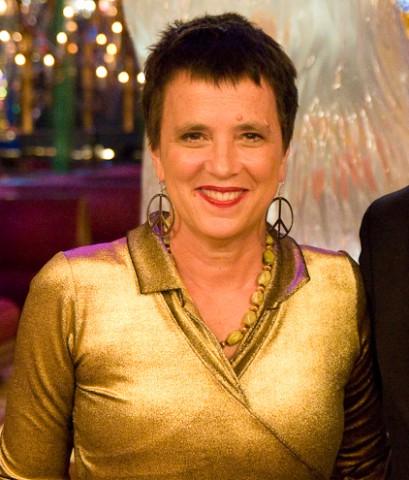 Leave aside, for a moment, the fact that she is not a real woman, she is fictional in every sense of the word. My trouble is that Theron’s characterization implies something lately accepted without question: That we’d like to see more of this type of woman. That soldiery, in addition to being a viable life path for members of the female gender (as well it should be), is also something women should aspire to. No less a feminist voice than Eve Ensler, author of the Vagina Monologues and a consultant on the movie, declared it “amazing to see such strong women”. Furiosa is merely the latest in a line of weapon-toting movie women, including Hunger Games’ Katniss Everdeen and Brave’s Princess Merida, who are held forth as paragons of the new femininity.

Yes, female warriors can be just as capable as male warriors, and yes, there is no shortage of a potential for toughness and valor among the feminine gender.

But is that really what our society needs from its women? More toughness and valor?

Let’s open our eyes and see what our world really looks like. In the Middle East, warring tribes are slaughtering each other over religion. In Africa, rebels are kidnapping young girls to finance aggression. Last year in Europe, Russia used military force to seize a section of Ukraine, a sovereign neighbor. In the United States, the country from which I write, violent riots result from young black men being killed by police in jarring numbers.

Who would conclude that the world needs more people willing and able to kill?

I want the opposite. I want more human kindness. More compassion. More tenderness. More empathy, more ability to see and feel the suffering of fellow humans, and less tolerance for allowing that suffering to go on.

Those qualities are found in abundance among women.

Who would conclude that the world needs more people willing and able to kill?I want the opposite. I want more human kindness. More compassion. More tenderness. More empathy, more ability to see and feel the suffering of fellow humans, and less tolerance for allowing that suffering to go on.Those qualities are found in abundance among females.

I freely admit there are compassionate, empathetic men, but historically, when the world has found hearts willing to open to the suffering of others, ears willing to hear, and arms willing to embrace, they have come more often from the female gender.

It is not our only contribution to the ascent of our species,  but it is a precious, vital, indispensable one. Without the Mother Teresas of the world, the Florence Nightingales, Clara Bartons, Harriet Tubmans, and billions of other women who daily choose to put the welfare of those they care for over their own, the human race would have destroyed itself, a victim of its own ability to compartmentalize suffering.

That’s why I’m concerned when we view physical power and ability to commit effective violence as “strong”, and feeling, nurturing, and giving of oneself to others as “weak”.  We need to urge women to attain this sort of strength, the thinking goes. Perhaps as a defense against discrimination, exploitation, and disparagement. This assumption misses the fact that love is strong. Giving, nurturing, and tenderness are powerful. In my opinion, they are far more powerful than violence.

By career, I am a classroom teacher. Every year, students who know nothing about my subject learn to do amazing things. I give them a professional skill and build their confidence. That’s power. Don’t believe me? Watch the process play out sometime. In contrast, violence can only destroy, or threaten destruction. There is misogyny at work here. The sort of power non-martial females possess is no less than the power of the mightiest warrior. But our culture has fallen into a mindset where things male are considered superior to things female.

Full disclosure for anyone still in the dark about my background, I did not start this life as a female. I spent my first fifty years the beneficiary of male privilege, and I’m well aware that I had avenues open to me that were closed to other females. Even in 2015, the U.S. military refuses women some combat options. That is shockingly backward and needs to be corrected, as does the fact that women face uphill climbs and glass ceilings when aspiring to many traditionally male-dominated careers.

One can scarcely blame the feminists and activists trying to batter down these barriers for using every strategy at their disposal, including high-profile, combat-capable female film characters. But I hope they’ll let me sound a note of caution about the consequences of encouraging women to be more like men. Women have that ability if they want it. But every time we take a woman, gird her for battle, encourage her to avail herself of the prerogatives of force and violence, and fortify her heart so it can withstand the emotional blowback, we lose something. We lose a tenderness that is priceless and that only the female gender offers humanity. Without it, we are doomed.