Trending
You are at:Home»Opinion»From the Editor»Duggar Clan Hides Predator in Their Family Whilst Calling Transgender People “Predators.” 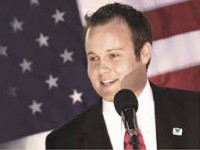 Josh Duggar and his clan-mother-of-the-year Michelle included-made the news this past week when it was revealed that he admitted to molesting underage girls, including his own sisters, in 2002 and 2003.

Now Michelle-she of the quiver-full belly- and female head of the family (properly subservient to her husband as a good Christian wife should be) is facing fierce, and justified criticism for equating transgender people to ‘child predators’ 12 years after he made his sordid confession to the clan, led by father Jim Bob (of course).

I’m sure, being the proper and pious Christians they are, that they know Matthew 7:5:

Thou hypocrite, first cast out the beam out of thine own eye; and then shalt thou see clearly to cast out the mote out of thy brother’s eye. Matthew 7:5

“Thou hypocrite, first cast out the beam out of thine own eye; and then shalt thou see clearly to cast out the mote out of thy brother’s eye.”

Perhaps that verse only pertains to some Christians as the Duggars seem to believe they have divine providence to spread their seed far and wide, child molester and all. Pardon me, alleged. It seems no one in law enforcement or official circles were made aware of the molestation until the three year statute of limitations expired.

I’m sure the Duggars made good use of the three years, praying away Josh’s sins and hoping desperately no one in authority would find out.

You see, way back in August 2014, years after Josh confessed to his family, tearfully and full of passion, to being a predator, Michelle Duggar and her brood made robocalls to voters in Fayetteville, Arkansas urging them to vote against a proposed anti-discrimination ordinance. Michelle narrated the call herself, her dulcet tones full of pious worry and angst at the thought of transgender people using the bathroom of the gender they identified with (the horror!)

Here is the full text of the calls made to voters:

Hello, this is Michelle Duggar.

I’m calling to inform you of some shocking news that would affect the safety of Northwest Arkansas women and children.

The Fayetteville City Council is voting on an ordinance this Tuesday night that would allow men – yes I said men – to use women’s and girls restrooms, locker rooms, showers, sleeping areas and other areas that are designated for females only.

I don’t believe the citizens of Fayetteville would want males with past child predator convictions that claim they are female to have a legal right to enter private areas that are reserved for women and girls.

I doubt that Fayetteville parents would stand for a law that would endanger their daughters or allow them to be traumatized by a man joining them in their private space.

We should never place the preference of an adult over the safety and innocence of a child.

Parents, who do you want undressing next to your daughter at the public swimming pool’s private changing area?

I still believe that we are a society that puts women and children first.

Women, young ladies and little girls deserve to use the restroom or any other facility in peace and safety. Will you speak up for protecting women and children?’ Michelle Duggar’s robocall.

Please, won’t someone think of the children? I wonder if Michelle was thinking of her own children and the other victims of her oldest son. Odd that she would accuse transpeople of being predators whilst hiding the predator in her own midst.

The authorities and public remained blissfully unaware of Josh’s actions until 2006 when an email was sent to Oprah Winfrey’s production team before the clan was scheduled to populate the vast space of her set. In Touch Magazine had obtained a copy of the 2007 police report and suddenly the cat was out of the bag, prompting Josh to make a public apology.

Social media users are in a rage at the hypocrisy of Michelle Duggar accusing transpeople of being predators whilst she spent years covering up her son’s indiscretions (though I’m sure much sincere praying was involved).

Ian, from Toronto, Canada tweeted: ‘@duggarfam Michelle Duggar went out of her way 2 label Trans folk as predators after she knew her son @joshduggar was a predator #duggars.

Another user wrote: ‘Michelle Duggar, who was concerned pro-trans laws would put predators in bathrooms apparently had no problem keeping a predator in own home.’

The bill had been authored by Alderman Matthew Petty and also lifted public accommodations bans for LGBT and transgender Fayetteville locals, and granted them more housing and employment rights. I’m sure the Duggars found the biblical passage denying transpeople protection from housing and work rights, not to mention the specific passage saying, “thou shalt not use the loo of a woman if thou hath the dangly bits of a man.”

A few hours after the police report was made public, Josh Duggar and family came forward to make their mea culpa and beg forgiveness for being hypocrites. No, sorry, the second part never happened.

“Twelve years ago, as a young teenager, I acted inexcusably for which I am extremely sorry and deeply regret. I hurt others, including my family and close friends,” Josh said in a statement.

“I confessed this to my parents who took several steps to help me address the situation. We spoke with the authorities where I confessed my wrongdoing, and my parents arranged for me and those affected by my actions to receive counseling.”

They also neglected to tell the police until 2006 but at least all involved received counseling. Josh went even further in castigating himself by resigning from his position in the D.C. based Family Research Council, a conservative Christian organization firmly opposed to same sex marriage, abortion, and things like science and research. They remain silent, however, on their position in regards to child molestation.

Jim Bob and Michelle released their own statement, saying:

Back 12 years ago our family went through one of the most difficult times of our lives.

When Josh was a young teenager, he made some very bad mistakes, and we were shocked. We had tried to teach him right from wrong.

That dark and difficult time caused us to seek God like never before.

Odd that their “dark and difficult” time didn’t lead to them talking to the police.

TLC, showing a rare streak of class and decency, pulled the show, 19 Kids and Counting, from their schedule but this came one day after showing a marathon of the show in which Josh was heavily featured.

So much for decency.

TLC has declined to comment on their long-term plans for the show or whether or not they knew one of their “cast members” was an admitted child molester.

One wonders what the Duggars will do now that their TLC-gravy train has ground to a halt and their chickens have come home to roost.