Trending
You are at:Home»Life»Transition»Getting Your First Binder – FTM 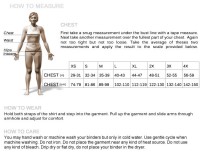 There comes a time in most people’s transition where they purchase and begin to use a binder. I’ll be celebrating my one year anniversary of my binder, so I thought I’d share some hints, tips and things I really wish I knew and took into consideration when I began to bind.

Note: This is written from the perspective of someone transitioning female to male, however there are non-binary people who were were AFAB (assigned female at birth) who also choose to bind.

Sometimes before making a purchase (due to financial issues or just curiosity) I know of a lot of people who  began binding without a ‘proper’ binder and instead would use tape or tight sports bras to flatten their chests. I have only had experience with the latter, but I know that they are both extremely harmful. The first month I spent binding I wore between 2 and 4 tight sports bras and shirts, and in just that month I experienced severe chest pain and breathing issues. I also had bruises around my armpit and the skin around my chest and the edge of the sports bras had rubbed off completely so doing this long term would be incredibly dangerous. I know not binding for some is distressing, but you need to put your health first (easier said than done, but I spent many nights unable or struggling to sleep from chest pains).

There comes the time when you actually buy your first binder. I advise you to go up a size if you are between sizes, especially if this is your first binder. I was right in the middle between L and M, I chose to buy a L which was definitely the right decision. If you go a size larger you may not get the best binding, but you will be much safer than if you chose to go a size down.

This is not something I have had personal experience with but if getting an S or XS, people have reported issues putting the binder on. An alternative way to put on your binder (the traditional way being over your head) is to pull it over your hips. This method is for people with shoulders too broad to be able to pull the binder over their heads.

Another thing you will need to pay attention to and learn is listening to your body. If you go from not binding to binding eight or more hours a day, chances are your body is going to be complaining. Binders also take a little while to break in, so at first it will be a tad tighter but if things are starting to hurt, listen to your body and take a break. It could take a few weeks for your body to adjust, so take things slowly so you don’t end up damaging yourself or causing yourself pain.

I know this story is beginning to feel like a list of rules, however these are things that are essentially the rules of binding, because there are some things you should never do because you will damage yourself. Sleeping in a binder is probably the most damaging thing you could do as it is recommended that you not wear a binder for over eight hours a day, and sleeping in it for nights in a row will seriously impact your ribs, chest and lungs.

Again I will share my personal experiences: a few months after getting my binder, I went away camping, and sharing a room with a friend I didn’t take it off throughout the whole trip, stretching over three days. When I did eventually take it off, I spent a few minutes struggling to breathe and was feeling the consequences of that a week or two later.

You are generally due for a new one every six months. Right now, writing this, I am wearing the one I have had  for a year, which is now light grey opposed to white as it was when I first got it and doesn’t bind like it used to, but it is incredibly comfy so it is good to wear for a few weeks in the hot weather to give myself a break. Every six months I purchase a new one, but I have yet to throw one away. Old, worn out ones still bind, and are 100x more comfortable.

Getting your first binder can be amazing, but the excitement will soon drain if you’re in a lot of pain so please – bind safe!