Trending
You are at:Home»Opinion»Columnists»Statistics Show Exactly How Many Times Trans People Have Attacked You in Bathrooms

Surprise: There are zero reported cases of this happening.

Several states, including Arizona, Florida, Texas and Kentucky, have considered or are considering enacting so-called “bathroom bills,” which restrict transgender people from using the bathroom in line with their gender identity, and are framed as “protective” measures against “sexual predators.”

But these bills are not protective. They’re vehicles for instilling fear of trans and gender-nonconforming people. For example, Florida State Representative Frank Artiles (R), who sponsored the Single Sex Public Facilities bill (HB 583), did not provide any evidence that a trans person has ever attacked cisgender (non-transgender) people in public restrooms when pressed by BuzzFeed in February. On his blog, Artiles wrote that this bill is a “preventative” measure and was not spurred by a specific incident.

Big fat zero: Spokespeople from the Transgender Law Center, the Human Rights Campaign and the American Civil Liberties Union told Mic that no statistical evidence of violence exists to warrant this legislation. Vincent Villano, the director of communications for the National Center for Transgender Equality, told Mic in an email that there isn’t any firm data to corroborate these lawmakers’ claims, and that NCTE has “not heard of a single instance of a transgender person harassing a non-transgender person in a public restroom. Those who claim otherwise have no evidence that this is true and use this notion to prey on the public’s stereotypes and fears about transgender people.”

The Advocate noted the same glaring fact last month regarding Texas’ bathroom legislation: “There has never been a verifiable reported instance of a trans person harassing a cisgender person, nor have there been any confirmed reports of male predators ‘pretending’ to be transgender to gain access to women’s spaces and commit crimes against them.”

Alachua County Crisis Center victims advocate Ashley Flattery told the Miami Herald, “This kind of idea that somebody is going to be assaulted in the bathroom by someone, and claim they have the right to be there because they are trans, is imaginary.” 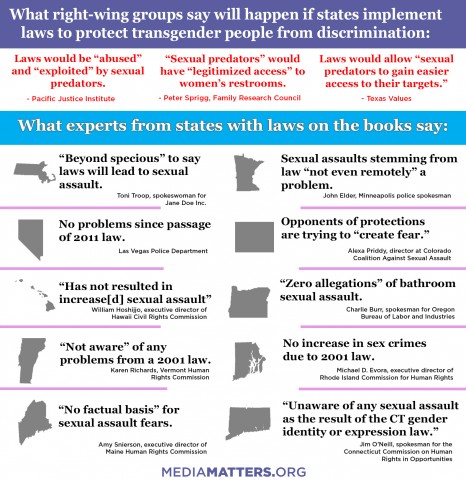 “Trans panic“: Media Matters‘ Luke Brinker and Carlos Maza wrote an in-depth report of the widely circulated narrative that trans people are predators, and how this myth is used to justify hate crimes against trans people. In fact, in most criminal courts, a defendant can legally use their fear of transgender people as their defense for assaulting or killing them. The results of Brinker and Maza’s survey of 15 “law enforcement officials, government employees and advocates for victims of sexual assault” from 12 states yielded no incidents of trans people harassing or assaulting cisgender people in public restrooms. They declared “the claim that sexual predators will exploit non-discrimination laws to sneak into women’s restrooms is a lie, plain and simple.”

The truth: Bathroom bills perpetuate violence against trans and gender-nonconforming individuals. According to the most recent National Transgender Discrimination Survey report, a whopping 63% of respondents “had experienced a serious act of discrimination” in their lifetime. Mic‘s Derrick Clifton wrote that “roughly 70% of trans people have reported being denied entrance, assaulted or harassed while trying to use a restroom,” according to a 2013 Williams Institute report. 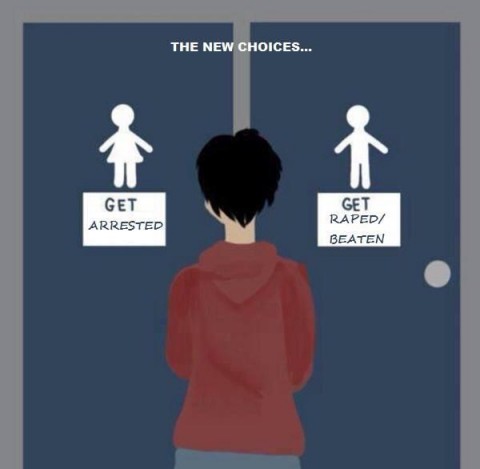 Civil rights are fought for and won in the restroom. The fact is, the motivation of these proposed laws is so glaringly obvious: They are driven by hate, born out of unjustified fear and, if adopted into law, set a dangerous precedent for how we treat the humanity of people.

Editor’s Note: This article was originally written by Dr. Marcie Bianco and is reprinted here with her generous permission.

Dr. Marcie Bianco is a Staff Writer at Mic, a Contributing Editor at Curve Magazine, and an adjunct associate professor at Hunter College. She has contributed to AfterEllen, Feministing, The Feminist Wire, The Huffington Post, Lambda Literary, XO Jane, and The Women’s Review of Books. She writes and lectures about ethics, from feminism to race relations. Her current writing projects include a manuscript about lesbian academic affairs and a collection of feminist essays.

Link to the original article