Trending
You are at:Home»Politics»Legal News»Transgender Woman Wins Court Battle Against Parents to Have SRS

Your support makes all of this possible. Please donate or subscribe. We have raised $355.20 so far this month, leaving us $2158.82 below our goal for the month of July! :( 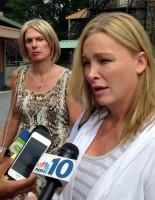 Parents objecting to their children transitioning is a common story in the trans* community. Less common are stories where the parents take their child to court to stop their surgery. Unheard of is a story when the “child” is 48.

48 year old Christine Kitzler took her parents to court last Wednesday in Bucks County, PA to win the right to have the GRS surgery which was scheduled for the day before. Her parents, Klaus and Ingrid Kitlzer,  traveled from Ohio to Bucks County and into the office of surgeon Christine McGinn in an attempt to have the surgery stopped.

“We had to have them removed by police,” says Christine McGinn, D.O.

“They’d rather have their daughter committed than have this surgery — if we were talking about a vasectomy, we wouldn’t be here today, ” said Dr. McGinn.

Failing that Christine’s parents filed for an emergency injunction which stopped the surgery from occurring on the scheduled day.

The Kitzler’s filed court papers — alleging Christine — born a boy and named Christopher — suffers from mild intellectual disability, suicidal ideation and serious medical conditions such as HIV and Hepatitis C that make surgery too risky. They argued Christine is not mentally stable able so they should be named her guardian.

Judge C. Theodore Fritsch Jr. presided over a three hour emergency hearing where Christine’s parents demand that he appoint them as legal guardians and subject her to an independent medical exam. Her father repeatedly used male pronouns during the hearing until the judge ordered him to stop and use female or gender-neutral pronouns. For the rest of the hearing he used “that person” or occasionally slipped back into male pronouns.

The Judge ruled that Christine, who testified at the hearing, displayed a clear understanding of the procedure and its risks before dismissing her parent’s demands.

Attorney Angela Giampolo represented Christine Kitzler during the hearing and said using guardianship to stop a sex change operation is unheard of.

“This isn’t a competency hearing, this isn’t a guardianship hearing, this is a difference of opinion hearing,” she said, noting that Christine prepared for the surgery for more than a year with multiple doctors approving Christine for the surgery, assessing her mental soundness. She stated it’s a life or death situation due to the very high number of suicides in the trans* population when individuals are denied the right to have surgery.

The judge sided with Christine Kitzler who said she knows the surgery is risky, but she’s ready. “I might for die but it’s worth dying. I would rather die than live the way I was.”

Dr. McGinn planned to operate on Christine the evening of the hearing and was going to cover the cost of the surgery.