Your support makes all of this possible. Please donate or subscribe. We have raised $305.00 so far this month, leaving us $2209.51 below our goal for the month of April! :(

Did you ever get the day of the week wrong? Like you thought it was Thursday, but it was really Friday? Pretty funny, right?

Not this time. Not when you assume that nobody would be home, so you do things you would only do if you wouldn’t be interrupted. Then it wouldn’t be funny. It would be a disaster.

Let me start at the beginning. I need to shave my legs and arms once a week. I’m a teenage boy (at least on the outside), so my hair grows fast. If I let the hair grow an extra week, it looks gross. Last time that happened, I promised myself I would never let them look like a man’s arms and legs again. I just can’t stand seeing them like that.

Problem is, Dad really hates it when I shave my legs and arms. He’s afraid I’m going to grow up like one of those men who dress as women and take hormones and get sex change operations.

He would be right.

Last time he caught me shaving my arms, he took away my computer and my game console for two weeks. And he made me clean the bathroom floor behind the toilets.

So I need to find a day when no one’s home. It’s not all that hard. Mom works as a waitress at a fancy restaurant where they have valet parkers and they iron the tablecloths.

Dad is a furniture maker, and he will stay in his workshop throughout the evening. That leaves me on my own a lot of the time. I nearly always can find a day when I can not only clear my arms and legs, but also spend some time dressed up.

Keeping clothes in the house is complicated. Dad figured out all my hiding places, and throws away anything he can find. Female clothes are usually enough to get me grounded for two weeks. If he’s in a bad mood, I’ll get an extra chore, too. Lately I’ve been keeping my one outfit in my locker at school in a pillowcase I swiped from the linen closet.

I take it home on the days I’ll be able to wear it.

Which brings me to when I thought it was Thursday.

I knew my parents were going to dinner with Mr. and Mrs. Anderson on Friday. They do it every couple months, and Mom makes sure she gets that day off work.

My father is six feet tall, and weighs two hundred and fifty pounds. In the first Gulf War, he served in the army, building bridges for troops and tanks to ride over while under enemy fire. He once got shrapnel in his shoulder but just kept building the bridge, so our troops could get to the enemy.

My point is that my father is not afraid of anything.

The thing is, not that many people have thousands of dollars lying around for custom handmade furniture. Those that do are pretty wealthy, and my father just doesn’t know a lot of wealthy people.

Mr. Anderson does. That’s his job, taking furniture orders from rich people and then finding a craftsman who will build it exactly the way the rich person wants it. He makes sure he only chooses craftsmen (like my father) whose work is perfect. Anytime one of his suppliers goofs a job, he’ll never order from that person again.

Now do you see why Dad is always very, very nice to Mr. Anderson?

Do you see why he’d want Mr. Anderson to think he was a steady, reliable, dependable, person?

Do you see why the LAST thing he’d ever want Mr. Anderson to see is his teenage son in a short skirt, strappy heels, and a shirt cut low over a bra stuffed with rags?

I should have figured out something was wrong when I got home from band practice and saw my mother’s car out front. But I still thought it was Thursday so I ignored that evidence. She must have gotten a ride with someone. Maybe she had trouble starting the car – she does sometimes. I made assumptions the way you do when you are so certain the world is a particular way that you can’t imagine otherwise. I knew I had at least a couple hours before my Dad got back from the workshop. I sat in the tub, leisurely shaving. I lovingly brought out my skirt and top, and savored the moment as the soft fabric caressed my body. Last of all I slipped my feet into the wonderful shoes, and voila, I was the person I always knew I should be. 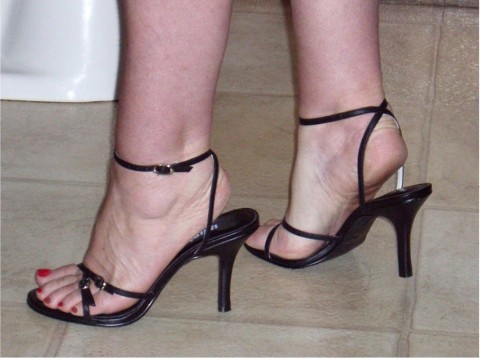 Problem is that at that point I could not resist seeing myself in the full length mirror. I saw no reason not to use the one outside the shower stall in the hallway bathroom.

I didn’t realize my mistake until I heard voices. At first I thought it was coming from the neighbor’s yard, but I heard the distinct sound of our front door opening and my father laughing the way he only does when Mr. Anderson is around. Suddenly my heart leapt into my throat. I froze in hopes no one would remember I was home, but no such luck. My mother must have spotted the light under the bathroom door. “Roy,” she called, just before I heard her knuckles rapping on the door. “The Andersons are here. Come out and say hello when you’re done.”

I weighed my options, and there weren’t many.

I could feign stomach problems or some similar reason to stay in the washroom until they leave (unlikely to work). I could try to cover my clothing with a towel (also not going to work). I could hurriedly strip off my feminine clothes and then walk naked into the hallway (guaranteed to work, but a really bad idea). Or I could just go out and let them see my feminine self in all its glory (the worst idea of all, but somehow, in my state of befuddlement, the one I chose).

I took a deep breath, smoothed my hair and clothing in the mirror, and stepped into the hallway.

How do I describe the horror on the four faces that saw me?

Mr. Anderson had a few moments of shock, but seemed to recover quickly. Mrs. Anderson, a tall, proper lady with meticulous manners and no visible sense of humor, showed no similar recovery. She was aghast and dropped her austere exterior to gape.

Mom jumped like she’d seen a mouse and looked over at my father. I couldn’t bring myself to look in his face. But my imagination easily conjured the fury that must have been there.

Improbably, it was Mrs. Anderson that spoke first, breaking a seemingly interminable interval of tense silence.

“Roy, why are dressed that way?”

What do I say? How do I answer this woman whom I barely know, but whose opinion of me may have a profound impact on Dad’s career.

Nothing came to mind except the truth.

Mr. Anderson turned toward my father, his look asking did you know this? I ventured a terrified glance at my father’s face, but it was impassive. His anger would come later, I knew, when he didn’t have a vital business colleague looking on.

What would happen then? How long would I be without electronics? What particularly nasty chore would be assigned? Or would my father finally snap and take to physically punishing me? I felt an involuntary shudder work it’s way up my body.

Mrs. Anderson broke the silence again. “Are you like those kids on Frontline? Are you going to get hormones and change your sex?”

Again, when I plumbed the depths of my mind for appropriate responses, only the truth came to mind.

I felt my gaze magnetically drawn to Dad’s face. He was still working on keeping the anger away from his expression, but wasn’t completely successful. I recognized the venom in his eyes. I was really going to be in for it. I found myself wishing the Andersons would just leave, so he would get on with it and I’d find out what was coming to me.

But they made no move toward the door. Instead, Mrs. Anderson turned to her husband. “Gary is working with those kids, isn’t he?” The shock had passed, and she was talking like we were discussing sunny weather.

Her husband nodded. “They started the program in June. He was telling me about it just last week.”

She turned to my father. “Lew knows the head of the Adolescent Psych Unit at Children’s Hospital. They’ve got an excellent program there to help transgender kids transition.”

My father was speechless. He managed a monotone, “that so?”

Anderson nodded. “I commissioned an antique-style desk for him. Now we play golf from time to time. Have you brought Roy in to see them? Gary says the sooner they get started on hormone therapy, the easier it is for them to transition.”

I could scarcely believe my eyes and ears. Refined adults calmly talking about the fact that I was standing there wearing a skirt and heels like I had a cough that needed looking after.

My father was having similar problems. He couldn’t ignore Anderson’s question, but how could he speak calmly about something that horrified him so? He managed to shake his head in a dismissive way, as if this was something too trivial to consider.

“Here, I’ll write his name down. He’s really great. He’ll know exactly what to do. Do you have some paper?”

To my father’s consternation, my mother found herself handing Mr. Anderson the pad and pencil we keep by the kitchen phone.

“Dr. Garrett Woodard,” Anderson said as he wrote. “Downtown Children’s Hospital.” He handed the sheet to my father. “Give him a call. Tell him you know me. He’ll take good care of Roy. He’s a cutting edge sort. He’ll know all the latest medications.”

My father accepted the slip of paper from him like it was contaminated. “Thanks,” he said without gratitude or feeling.

“Well, we’d really better be going,” Anderson said. “We’ll do this again in a month or two. I’m looking forward to it. I can’t wait to hear how Roy does with Dr. Woodard.”

Mom and Dad followed him out the door, eager to get him away from the embarrassment. However Mrs. Anderson stayed behind. When she spoke to me, it’s was in a deeper voice than I’m accustomed to hearing from her – almost a man’s voice. “If your Dad gives you a hard time, let me know. I’ll make sure he follows through.”