Trending
You are at:Home»Opinion»Columnists»A Suggested Structure for a TDoR Observance

November 20 is international Transgender Day of Remembrance (TDoR), a day set aside for remembering the victims of violence against transgender people. Given the high profile killings of transgender women this year, especially women of color, the need for such a day is plain. Typically progressive churches and other places of worship plan a service on or around TDoR that reads aloud the names of those whose lives have succumbed to violent attacks in the past year. Some also add suicide victims to that list.

As much as TDoR is needed, I can’t give my wholehearted support to that observance. Yes, our lost brothers and sisters deserve to be remembered and honored, especially as they are so often forgotten and forsaken by their families. But I’m concerned that a simple memorial does nothing toward solving the problem or lowering the number of next year’s victims.

If you plan a TDoR service or are consulted by someone leading one, I urge you to use the platform not just to commemorate those who have passed, but to educate those who are living. Particularly, the billions of cisgender people who have no idea what issues we face, or even who we are and why we do what we do.

If I were consulted during the planning phase of a TDoR service (as might happen this year), here is how I would structure it:

Part One: Look at root causes. Murders of trans people don’t happen in a vacuum. They occur amid a cultural and economic landscape. Transgender murder victims typically live in economic disadvantage, in areas and among populations without strong LGBT acceptance. Those from progressive areas, those who can afford safe neighborhoods, and those with opportunities to earn money away from violence and criminal activity, those transgender people generally aren’t found  among the murder statistics.

The factors that consign so many of our number to these situations are easy to spot:

* Rejection by family and community shuts us out of the usual supports that help people begin successful careers.

* Employment discrimination denies many of us the opportunity to use our skills to earn a decent living.

* Housing discrimination keeps us from safer neighborhoods and living situations.

* Prejudice keeps us from forming social and romantic attachments that provide a safety net, a stable place to live, and a source of advice, support, and encouragement.

The root cause of each of these factors is the same: Intolerance built on ignorance and misinformation about who we are. Some is fed by religious institutions, politicians, and the media, some is passed on through family and community connections, and some comes simply from our own isolation and lack of visibility. If you’ve never knowingly met a transgender person, you are on your own to form impressions and misconceptions. No reality contradicts the images in your mind.

Part two: How we keep this from happening. The solution to ignorance is understanding and understanding comes from education. Even a little education goes a long way. A lifelong study of gender and its manifestations and consequences on the part of cisgender people is unnecessary. Our treatment would improve mightily if only every person in the world understood just five things:

Part three: What allies can do. Every TDoR service should close by urging allies to help reduce the prejudice that trans people face. People should be encouraged to spread knowledge of the five items above whenever they can. Bring them into conversation. Highlight them when the subject comes up. You never know who will potentially be a trans person’s parent, employer, friend, relative, romantic partner, neighbor, landlord, or positive life presence. By educating just one person about even a little of what it means to be transgender, you may improve a trans person’s life immeasurably. 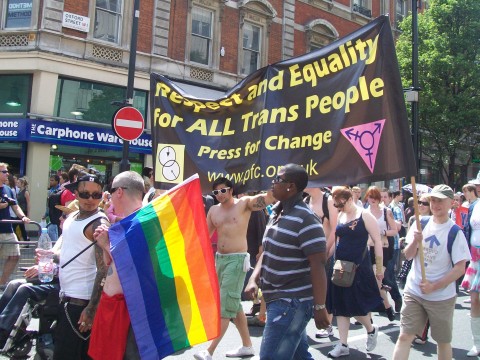