Trending
You are at:Home»Entertainment»“It’s not just the fact that Aydian looks fantastic”

In 2015, thousands of people campaigned for Aydian Dowling, a 27 year old transgender man and fitness enthusiast, to get him on the cover of Men’s Health Magazine. He won the public vote, earning 72,672 votes compared with only 23,572 for the runner-up, appeared on TV programmes like The Ellen Show and amassed a following of almost 100,000 followers on Instagram. But editors of the magazine chose the overall winner and instead went with a cis male, a firefighter from Kentucky.

Gay Times decided to give him the cover he already had earned, making him the first trans man to appear on an international magazine. 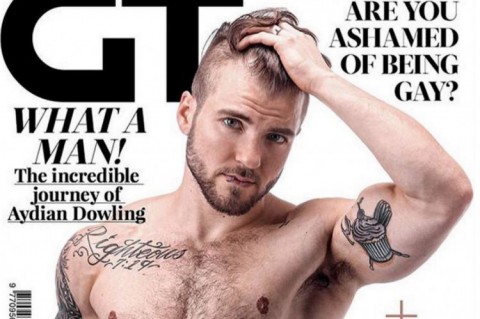 ”Aydian’s story has interested me ever since I saw he was in the running to be a cover star for Men’s Health – everyone was talking about him. So I’m delighted, and honoured, that he agreed to tell his story to GT”, editor Darren Scott commented to The Independent. “It’s not just the fact that Aydian looks fantastic – I wish I had his drive to work out – but that his story is so interesting, and so beautifully told. It’s a touching story and I’m so glad we’re able to help get his message out there properly.”

Discussing the first time he was identified as male, Dowling told Gay Times:

“A woman behind a counter of a 7-Eleven said, ‘I can serve you over here, sir.’ It was the first time a complete stranger was seeing the real me, and I was living off that high for quite a while. It was like all my Christmases had come at once, like I was living on cloud nine. That must’ve been the best damn stick of gum I’ve ever bought.“

The top surgery was his first operation ever: “It was the first time I was going to be ‘put under’ and go through any kind of surgery in my life, and that alone was terrifying. But the joy and feeling of being able to identify more with my body weighed much heavier than anything else.”