Trending
You are at:Home»Opinion»Columnists»Scalia’s Death: What Does it Mean for the Trans Community?

U.S. Supreme Court Justice Antonin Scalia, who died last weekend aged 79, was not a friend to the LGBT community. As pointed out very eloquently by a member of this forum, his willingness in the Lawrence v. Texas decision to send us to jail for private consensual homosexual acts shows a callous disregard for our humanity. However tragic it is when any human life ends, those who value human rights have a hard time keeping ourselves from celebrating his departure.

Unfortunately, the events that followed his death read like one of those good news / bad news jokes. The good news is that the nominee to replace him will be chosen by one of the most sympathetic presidents in history to LGBT issues. The bad news is that there is almost no chance that any nominee chosen by President Obama will ever make it to Scalia’s seat.

I should mention at this point, that I am neither a legal scholar nor a political pundit, so any prediction or observation I make must be taken with a grain of salt. I really hope I’m wrong about this. But my intuition based on a lifetime of watching how the American political system works tells me it isn’t going to happen.

Scalia’s body was not yet cold when the New York Times reported Senate Majority Leader Mitch McConnell’s declaration that Obama must not nominate Scalia’s successor, insisting that the next president must be the one to replace him. 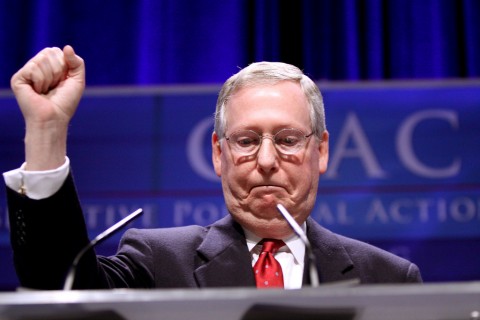 Senate Majority Leader Mitch McConnell, who insisted this week that Scalia’s successor be chosen by the next president

Given that the Senate must confirm the new justice, and indeed requires 60 of its 100 senators even to bring the matter to a vote, McConnell could easily make it impossible.

But will he? John Oliver’s recent segment on Last Week Tonight shows Mr. McConnell arguing exactly the opposite point a number of years ago when the shoe was on the other foot and he was discussing a conservative president appointing a judge in the last six months of his presidential term. So it’s clear that McConnell’s insistence that a president not fill a Supreme Court vacancy in the last year of his presidency is opportunistic and not heartfelt. There is no law or precedent that dictates when a president is allowed to make a nomination for a judicial appointment. If the senate refuses to vote on one of Obama’s nominees, it would purely be an exercise of political power and not any sort consideration of propriety or historical custom.

But McConnell and the senate have the power and have shown absolutely no compunction in the past about using it. This is the same Senator McConnell, who in 2010 declared that the senate’s number one priority should be making Obama a one-term president. He has no problem being perceived as one who would put partisanship above the welfare of the country or any duty to toward the will of the electorate.

Based on all that, I expect that McConnell and the senate will carry out their stated intention to block any nominee Obama puts forth. What I don’t know is whether the voters will make them pay. A lot depends on how well Obama and the Democrats can successfully call out their hypocrisy and make a case that he should be the one to pick the next justice. Historically that has not been Mr. Obama’s strong point. He has been effective at finding ways to get around the lack of legislative support for his agenda. He has been far less effective calling attention to congressional obstructionism. Once again, I hope I’m wrong, but I’m not optimistic about his willingness and ability to focus voter attention negatively on the senate’s overreach.

That’s where we come in.

We need to speak out in whatever way possible against McConnell’s refusal to follow the normal nomination and confirmation process.

It is likely that in the coming years a number of critical issues to the transgender community will be decided by the U.S. high court. The day is not far off when our bathroom rights will be before them. Their decision will make the difference between people seeing us as fully members of our identified gender (if justices rule in our favor) or as members of our birth sex (if they do not). The case of Gavin Grimm v. Gloucester County School Board has already reached the appellate level after being decided unfavorably by a lower court. Public opinion can be powerfully shaped by Supreme Court decisions. It took Brown v. Board of Education for the public to accept school integration as a reasonable idea. Obergefell v. Hodges’ legalization of gay marriage has legitimized that institution. Enshrining our identities into law would be a powerful boost to acceptance of transgender people.

It’s not just bathroom rights that may be decided. The issue of whether gender expression and gender identity are protected under sex discrimination statutes is controversial and has yet to see enough federal court attention to be considered established law. This has profound implications toward whether we are protected from employment discrimination, and has the potential for being settled by the high court as well.

Public opinion can be powerfully shaped by Supreme Court decisions.

So the stakes are high when it comes to replacing Scalia with a justice who might be sympathetic to our plight. We cannot afford to be silent. We need to speak out in whatever way possible against McConnell’s refusal to follow the normal nomination and confirmation process. We need to make ourselves visible and our voices heard. If McConnell and the senate insist upon unabashedly using their power to delay progress until the next senate and president take office, it is up to us to ensure that move backfires. The president and the senate chosen this coming November must be counted on to choose a justice capable of understanding our human struggle.