Trending
You are at:Home»News»Transgender girl kickstarts a blue, pink and white house next to Westboro Baptist Church

Your support makes all of this possible. Please donate or subscribe. We have raised $630.00 so far this month, leaving us $1894.46 below our goal for the month of January! :(

In March 2013, the rainbow-colored “Equality House” opened up in Topeka, Kansas right across the street from the infamous Westboro Baptist Church, a hate group internationally known for its campaigns against the LGBT community. For the last two years, the house, which became an LGBT center, has painted itself in the colors of the transgender flag for one week, during the Trans Days of Remembrance.

Last year, 8 year old Avery Jackson, a transgender girl, visited the house while it was painted in the trans colors and found out there is a community of people who support her. It was that day she decided to start showing her face in pictures because she knew she’d be safe and accepted. “I loved the Rainbow House when it was painted like the transgender flag. I felt so happy and proud to be transgender.”

It touched Planting Peace, the organization behind Equality House so much, that it joined forces with her to expand with an additional house and permanently paint it in the colors of the transgender flag. “The Equality House has always been a positive, iconic landmark for LGBT people to visit,” said Debi Jackson, Avery’s mother. “I would love to see a Transgender House embraced the same way–with enthusiasm, love and pride.”

Planting Peace president Aaron Jackson said Avery’s “courage and energy” inspired them to create a house dedicated to the transgender community, and all transgender children. “With nearly half of transgender children attempting suicide because of bullying, violence, and believing they are ‘less than’, we need to do everything we can to show compassion and let them know there are many, many people in the world who embrace and support them,” he told ABC news.

The campaign has raised 7 per cent of the $70,000 required to get the house up and running. Please donate here. 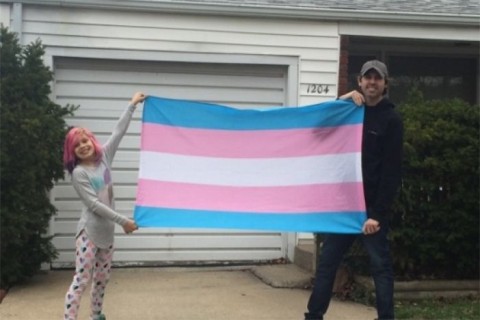