Trending
You are at:Home»News»Business»Transgender Applicants Could Face Confusion When Purchasing Auto Insurance

Your support makes all of this possible. Please donate or subscribe. We have raised $235.00 so far this month, leaving us $2278.00 below our goal for the month of July! :(

In pricing their auto insurance policies, it’s a well known fact that insurers discriminate based upon whether the applicant is male or female. For example, younger men tend to be much riskier to insure than their female peers. Because of this, young men typically pay higher rates.

To account for this risk insurers ask applicants for their “gender” when they are in the process of purchasing their policy. Obviously for most people this is a fairly straightforward question, but for transgender people their answer may be causing unnecessary confusion when they receive their final insurance quote.

How is this possible? It turns out that while most auto insurers ask for “gender” what they really want you to do is identify your “sex”. It sounds like semantics, but it’s not.

To illustrate our point with an example, a male-at-birth applicant may mark down “Female” on their insurance application and, all else being equal, could be quoted a more affordable rate. However, if their sex (as defined by the DMV and what’s on your birth certificate) legally is “Male” the insurance quote they’re receiving online could be cheaper than the final quote they receive in the mail from the insurance company.

What can be done to remedy the confusion? We think that by having the auto insurers change the label on their applications from “Gender” to “Biological Sex”, and specifying that they want what is listed at the DMV, the question would become less ambiguous and easier to answer for transgender Americans.

The process for changing gender on a driver’s license varies state to state, and ranges from having a psychologist or physician vouch for your transition to the much more complex proof of Gender Reassignment Surgery. 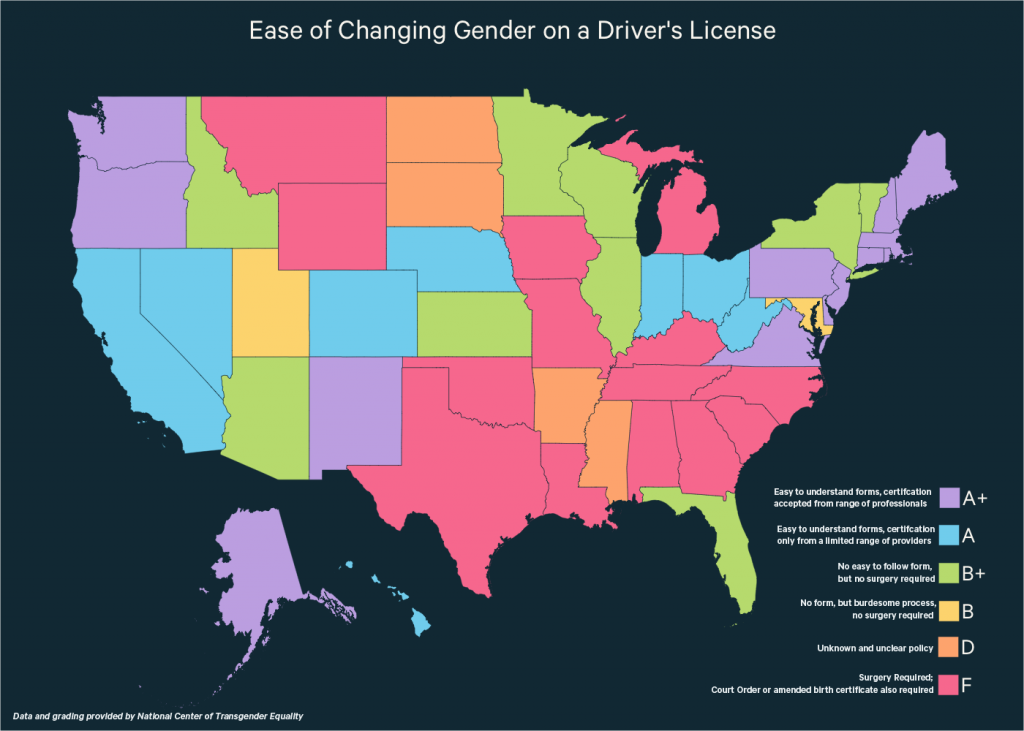 65% of states have a moderately easy to very easy process of changing gender on a license. In A+ states such as New Jersey and Pennsylvania, to change gender on a license only requires a simple form that is filled out by either a physician, therapist, counselor, or social worker. In a B+ state such as New York, the process is not much harder, but the forms can be a bit more complex, and the number of professionals who can vouch for your transition are more restricted–limited to only a physician, psychologist or psychiatrist.

The 18 states graded a D or less, however, present the largest problem for transgender drivers. The main reason for those states’ low ranking is due to their requirement for proof of gender reassignment surgery (GRS). While it may be portrayed that GRS is a common step taken by transgender people, it is in fact rarely pursued, in large part due to its cost–upwards of $40,000. For a large portion of transgender people for whom surgery is infeasible, it may be impossible to get their gender accurately reflected on their auto insurance policy.

Further complicating the issue is that in all fifty states, a license can only say male or female, meaning non-binary transgender drivers will not be able to have their auto insurance policy reflect their gender. While 11 countries currently recognize a third gender, there is no legislation, federal or state, which deals with non-binary gender preferences in the United States.

What This All Means

If a transgender person wishes to drive a car, they will need to apply for insurance, and come face to face with this confusing, and troubling situation. A simple “Sex at Birth” slot or similar alternative on application forms could clarify the question and answer for both parties, but a change is not likely to happen soon. Changes in the underwriting process are multifaceted, requiring governments, insurers, and actuaries who would need a lot of time to create a fair system of accounting for gender ambiguities in their policy writing process. The best hope is as the fight for transgender equality grows, and more industries that lack the appreciation for the difference sex and gender are brought to light, the momentum for change will pick up.

By Craig Casazza originally published at ValuePenguin, republished with permission.