Trending
You are at:Home»Politics»Clinton fails to respond to Trans-Focused Presidential Candidate Questionaire

Washington, DC – Trans United Fund (TUF), a national political voice for trans people in the U.S., today announced an update to their distribution of the first ever trans focused questionnaire to Presidential candidates.

No Republican candidate’s campaign responded and both the Sander’s and Clinton campaign committed to complete the survey.  However, only the Sanders campaign has followed through on that commitment. Sander’s completion of the questionnaire is a historic first.

Given Secretary Clinton’s record of leadership on several key issues impacting the transgender community and the campaign’s commitment to complete the historic survey, members of the Trans United Fund’s advisory board remained disappointed and concerned by the Clinton campaign’s failure to complete the survey. 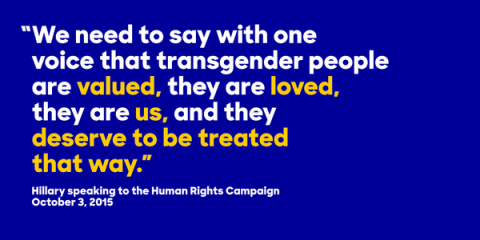 As such, the leadership advisory board is publicly calling on Secretary Clinton to complete the questionnaire by this Friday, May 27th and for representatives to meet with advisory committee members.

‘We are proud to have trans people supporting various candidates and greater public support from the candidates themselves than at any time in history,” said Monica Roberts, advisory member of the TUF Presidential endorsement committee.

“If people thought the old patterns of silent gratitude; quiet, off the record conversations and hoping for the best would be how we react to slights in this new trans rights paradigm, that would be a critical mistake.

The advisory committee of TUF represents a diverse, cross section of trans people – including many of the most vulnerable. We know personally what’s on the line for us and our nation and we fervently believe it is crucial to seek a bold and unambiguous commitment to our community from all candidates that seek our support.

We believe that the Secretary is a champion on trans rights issues and are perplexed by the campaign’s reluctance to follow through and go on the record with stating that commitment.  We believe it’s important – not just for us – but also for our community, our allies and the people like myself who enthusiastically voted for you in the various primary contests – to have the benefit of responses from both candidates,” concluded Roberts.

Trans United Fund decided to engage in the Presidential election because it is critical that all candidates understand that supporting non-discrimination measures is a necessary start, but not sufficient in itself, to support trans communities.

Fighting for trans equality means a serious commitment to a set of thoughtful policies that address the issues that impact our community  disproportionately, particularly the most vulnerable members of our community, including youth, undocumented people, people of color, women, and those who lives at the intersections of  many of these identities.

Although many high profile LGBTQ organizations – some with and some without a questionnaire – have already endorsed in this election – no group centering trans communities has done so to date.

The Trans United Fund Advisory Committee sent questionnaires to each Presidential candidate on April 11th, 2016, and shared via Facebook, Twitter, and email that the questionnaires had been sent. Within thirty minutes, both Secretary Clinton’s and Senator Sander’s campaigns replied with an enthusiastic commitment to complete this questionnaire.

Trans United Fund received a call from a Clinton campaign representative a full two weeks after the campaign had committed to complete the survey explaining that the survey was ‘too long’ and the campaign did not have the appropriate resources to complete it in a timely manner.

The Sander’s campaign completed the questionnaire completely and on time.

“The trans community is under attack, and in order for us to make a credible, and impactful endorsement, we need a commitment from our leaders on issues that make life and death differences for trans people. That is why we created a survey that included key issues like violence and HIV as well as non-discrimination and bullying. We believe – and we believe the Secretary believes – that these are political issues. And that’s why we’re holding firm that both candidates should honor their commitment to complete the questionnaire and let our community and our allies know where they stand. Our lives are on the line!” said Bamby Salcedo, advisory member of the TUF Presidential endorsement committee.

Although we did submit a questionnaire to the Trump campaign, we have not yet received a response.

Trans United was launched to unite the voices of trans people and our allies to combat the endemic levels of violence and discrimination faced by the trans community and the well funded and coordinated attacks by the conservative movement against trans people. Our Advisory Committee is comprised of a multi-racial, multi-generational team with identities across the gender spectrum. Trans United Fund is the C4 arm of Trans United and represents the only, national express advocacy political group centering trans lives.