Trending
You are at:Home»Entertainment»Movies»Trans in History, Memory and Activism, Susan Stryker in Bologna (Italy).

Bologna, Italy – On 20th and 21st June 2016, Susan Stryker, author and director of the documentary movie “Screaming Queens. The Riot at the Compton’s Cafeteria“, was in Bologna for a two days event organized by the “Società delle Storiche”, the History Cultures Civility Department “Alma Mater Studiorum” of Bologna University and MIT (Movement of Transsexual Identity) in collaboration with Cassero LGBT Center.

The “Screaming Queens” documentary narrates the quiet unknown story of the first act of collective resistance of trans people.

In 1966, three years before the most famous Stonewall Inn riot in New York, a group of trans people reacted against the police brutality starting a riot at Compton’s Cafeteria in San Francisco.

Susan Stryker claims that the Riot at the Compton’s Cafeteria has been the first known incident of collective militant queer resistance to c in U.S. history.

After the riot, when transgender people finally stood up to the abuse and discrimination, transgender and transsexual individuals were allowed to live their lives more freely and openly.

According to the online encyclopedia glbtq.com, the riot marked a turning point in the local LGBT movement:

“In the aftermath of the riot at Compton’s, a network of transgender social, psychological, and medical support services was established, which culminated in 1968 with the creation of the National Transsexual Counseling Unit (NTCU), the first such peer-run support and advocacy organization in the world.”

Nowadays, on the walkway in the street where once there was “Compton’s Cafeteria”, there is a plaque in memory of 1966 transgender riot with this inscription: 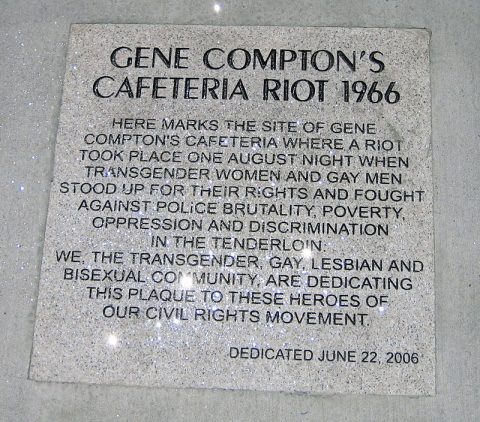 “Here marks the site of Gene Compton’s Cafeteria where a riot took
place one August night when transgender women and gay men stood
up for their rights and fought against police brutality, poverty, oppression,
and discrimination in the Tenderloin.
We, the transgender, gay, lesbian, and bisexual community,
are dedicating this plaque to these heroes of our civil rights movement.”

Susan Stryker comments her experience in Bologna in her Facebook page:

“Bologna has been very inspiring. I had the pleasure of seeing my film “” with Italian subtitles, screened at the Cassero LGBT Center in the historic Salara building, with a very appreciative audience.

We held a lively discussion of trans history, memory, scholarship, and activism at the University of Bologna, coordinated by Valentina Greco, with participation from the Società Italiana delle Storiche, Laboratorio Smaschieramenti, Daniela Crocetti, Olivia Fiorilli, Favolosa Coalizione, and the godmother of the trans community here, Porpora Marcasciano. Lorenzo Bernini came all the way from Verona’s Research Centre PoliTeSse to participate.

There is such a great awareness here of historical scholarship as social activism.

It was a joy to visit the offices of MIT: Movimento Identità Transessuale, which has been leading the charge on behalf of trans lives here in Italy since the late 1970s. In my book “Transgender History” I reprinted a document of the US transgender liberation movement from the early 1970s that made a list of demands, including the establishment of transsexual assistance centers in every major city, under the direction of trans people themselves. That radical vision is a reality in Bologna.

They have a trans archive, the walls lined with photos of community elders, and programs that run the gamut from prisoner support to homeless shelters to sex-worker outreach to a film festival and medical/legal services.

The day I visited was endocrinology day, when trans people could come get their hormones from a doctor, outside of a clinical setting. They proudly showed me photos of visiting trans activists, including Sylvia Rivera and Leslie Feinberg. It has been a fantastic visit, and I hope to come again.”