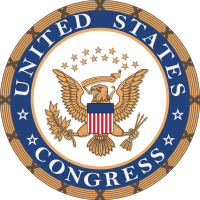 The Seal of the U.S. Congress

Washington, DC – A sweeping piece of discriminatory legislation that would allow businesses and government contractors to deny services to lesbian, gay, bisexual and transgender (LGBT) people is set for a hearing in the U.S. House of Representatives next month. The House Committee on Oversight and Government Reform (OGR) will hold a hearing on the deceptively titled First Amendment Defense Act (FADA) on July 12.

FADA (S. 1598/H.B. 2802) was originally introduced in Congress last year and has not moved to date. The hearing in the House, however, comes at the close of a state legislative season which saw more than 200 bills singling out LGBT Americans for discrimination. Last month, House lawmakers passed a vaguely written measure that would likely upend President Obama’s executive order extending LGBT nondiscrimination protections to employees of federal contractors. That measure, attached to a defense appropriations bill, must be addressed in an upcoming conference committee with Senate lawmakers.

“It’s stunning that some lawmakers in Congress continue to prioritize legislation that promotes discrimination against the LGBT community,” said Matt McTighe, Freedom for All Americans executive director. “This out-of-touch legislation does nothing to strengthen the existing protections for religious freedom – all this bill does is make it even easier to discriminate against LGBT people. Americans overwhelmingly support treating LGBT people fairly and equally under the law, and this bill intentionally undermines that very value.”

Here are just a few examples of how FADA would allow for taxpayer-funded discrimination:

About Freedom for All Americans

Freedom for All Americans is the bipartisan campaign to secure full nondiscrimination protections for LGBT people nationwide. Our work brings together Republicans and Democrats, businesses large and small, people of faith, and allies from all walks of life to make the case for comprehensive nondiscrimination protections that ensure everyone is treated fairly and equally.