On Thursday, the National Center for Transgender Equality revealed the results of the most massive survey of transgender people ever conducted. The picture is not rosy, with transgender people suffering rampant rates of discrimination. A community bracing for increased persecution under a Donald Trump administration has already been struggling severely to access the basic necessities of life.

The U.S. Trans Survey, conducted in September 2015, is a follow-up to the National Transgender Discrimination Survey (NTDS), published in 2011 based on results collected in 2008–09. An unprecedented 27,715 transgender people took the new survey, four times how many participated in the NTDS. (A recent study suggests there are about 1.4 million transgender people living in the United States.) The thorough survey covered multiple facets of life, with carefully constructed questions that allow the results to be compared with national averages.

Overall, transgender people suffer — as the NTDS was subtitled — injustice at every turn in every conceivable way, starting with their families.

One in ten trans people who were out to their immediate families reported that a family member was violent toward them because of their gender identity. Additionally, 8 percent reported being kicked out of their homes for being transgender, while 10 percent reported running away from home — a third before the age of 15. In general, 18 percent said their family was unsupportive, and another 22 percent said their family was neither supportive nor unsupportive.

Conversely, those who said their families were supportive were far less likely to experience homelessness, to have attempted suicide, or to currently be experiencing severe stress in their lives. 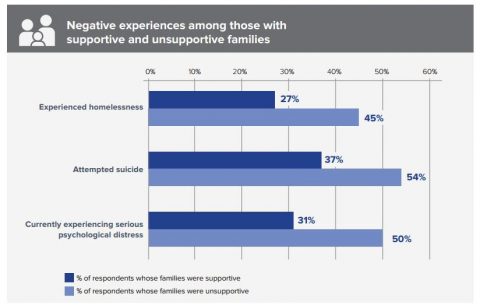 From there, the world was also quite harsh.

The survey asked about what people experienced if they were out or perceived as transgender in grades K-12:

Simply finding a safe place to sleep at night is a significant hurdle for transgender people:

Just going about their daily lives, trans people are subjected to abuse:

Simply securing legal recognition is a challenge for many transgender people: 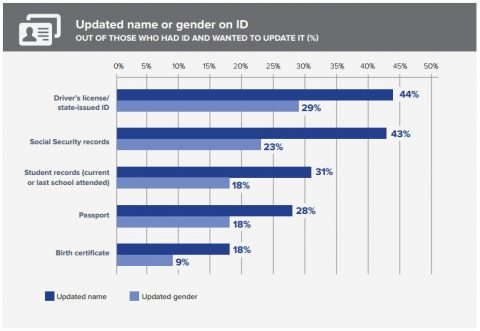 Accessing basic goods and services is also a major hurdle for transgender people:

Trans people were far more likely to experience discrimination if they also had an intersecting identity. 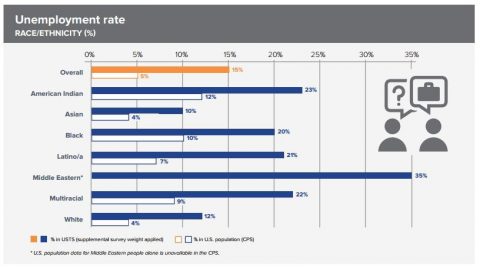 Despite these bleak findings about current transgender life, the survey is not without good news. The report notes that the sheer number of trans people who came forward to take the survey reflects the increasing visibility that the transgender community has experienced, including those who identity outside the gender binary.

The study also suggests that acceptance is growing, with respondents actually highlighting many family members, classmates, and coworkers who were supportive of their identity.

Moreover, the study is a trove of information about the transgender community and its diversity of experiences. As happened with the NTDS, there will likely be countless follow-up analyses of the data compiled that will serve transgender advocacy for years to come.

In the meantime, the U.S. Trans Survey provides an alarming glimpse at what transgender people currently experience. It’s invaluable information in the current political climate. The Trump administration has promised to roll back many of the protections President Obama put in place for the transgender community, and several states are gearing up to consider anti-transgender legislation, following North Carolina’s lead with HB2.

The survey will be a vital tool for highlighting the consequences of these injustices and resisting efforts to subject transgender people to even more persecution and violence.

Editor’s Note: Thank you to Zack Ford and thinkprogress.org for allowing us to rerun this story. It was originally published at https://thinkprogress.org/transgender-survey-41827bce7759#.1tmre561u