Trending
You are at:Home»News»Housing discrimination against transgender people is even worse than we thought

Your support makes all of this possible. Please donate or subscribe. We have raised $535.67 so far this month, leaving us $1989.33 below our goal for the month of October! :(

The U.S. Trans Survey, a massive survey of over 27,000 transgender people conducted in 2015, found that 23 percent had experienced some form of housing discrimination, such as being denied a home or apartment because of their gender identity. If a new study from Suffolk University Law School in any indication, that number is low and trans people are experiencing much more discrimination in housing than they even realize.

The study, the largest of its kind, paired transgender and gender non-conforming (GNC) people with cisgender people to respond to various housing ads around Boston. Each member of the pair would meet with the agent separately and document how they were treated during the site visit. The trans/GNC would drop obvious statements about their gender identity, such as preferring “they” as a pronoun or explaining why their legal name would be listed differently in a background check. Nearly two-thirds of the time, the cisgender person was shown more amenities, given better deals, or otherwise encouraged to apply for the unit than the trans/GNC person.

According to the study, trans/GNC participants were: “1) more likely to be quoted a higher rental price; 2) less likely to be offered a financial incentive to rent the apartment; 3) shown fewer areas than the control (i.e. such as storage area, laundry facilities, etc.); and 4) less likely to be asked their name upon meeting the housing provider face to face.” 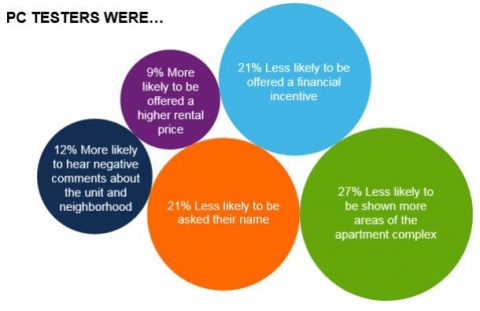 Discriminating on the basis of gender identity in housing is notably a violation of Massachusetts state law, but as the study reports, many of the trans/GNC participants in the study “were not even aware that they were treated differently from their gender conforming and cisgender counterparts (controls).” Study author Jamie Langowski described this to the Huffington Post as “discrimination with a smile,” where people are being treated differently without realizing that the treatment is inferior to what other people are experiencing.

The differences in this discrimination are subtle, but not meaningless. For example, in one case, the trans/GNC participant was told to call for an application, while the control tester at the same viewing was handed an application while they were there. In another case, the agent told the trans/GNC individual about a second available unit, but talked negatively about it, which discouraged the participant from wanting to see it. The control participant was told about the unit without the negative context and actually looked at it during the visit.

One of the most drastic differences between the visits involved the control being told that the security deposit could be reduced by 75 percent — savings of $1,500 — and offered a cheaper credit check as well. The trans/GNC participant was offered no such deals.

This kind of invisible discrimination isn’t unique to housing; multiple recent studies have documented the same effect in employment. The Washington, D.C. Office of Human Rights ran résumé tests among different employers in 2015, and nearly half the time, the transgender candidates were offered fewer calls back despite being generally more qualified than the control candidates. Another study from New York University found last year that LGBT women applying for jobs are less likely to be called back than their non-LGBT peers.

A similar experience has also been documented in public accommodations. A 2016 study found that transgender customers at retail stores were not treated as considerately as other customers. They were more likely to be ignored by store employees, for example, and 40 percent of them even experienced negative treatment from those employees.

These studies are increasingly demonstrating that across society, transgender people are actually experiencing higher rates of discrimination than they even realize. Indeed, though the transgender respondents of the U.S. Trans Survey already documented high rates of discrimination, the climate is probably quite worse than those statistics suggest.