Your support makes all of this possible. Please donate or subscribe. We have raised $211.74 so far this month, leaving us $2299.01 below our goal for the month of March! :(

Washington, DC – The Human Rights Campaign in conjunction with the Equality Federation Institute has released a comprehensive state-by-state report reviewing statewide laws and policies affecting LGBTQ people and their families. The State Equality Index (SEI) rates all 50 state plus Washington, DC. The report also details the effects of over 125 new anti-LGBTQ laws introduced in 30 states during 2017. Among other topics, the laws target marriage equality and target the transgender community, including transgender children.

There have been encouraging signs for LGBTQ youth allowing easier update of identity documents. In 2017 Connecticut, New Mexico, Rhode Island and Nevada banned conversion therapy, increasing the number to 11 states, including Washington, DC.

The number of states raking in the highest category, “Working Toward Innovative Equality,” increased from nine to 13 in the 2017 SEI report. Five each rank in the categories “Solidifying Equality” and “Building Equality” while the majority of states, 27 of the 50 states, ranks in the lowest category “High Priority to Achieve Basic Equality” offering little to now protection to LGBTQ people and in many cases not even any LGBTQ protection. A majority of these states do not have any non-discrimination laws that include sexual orientation or gender identity. 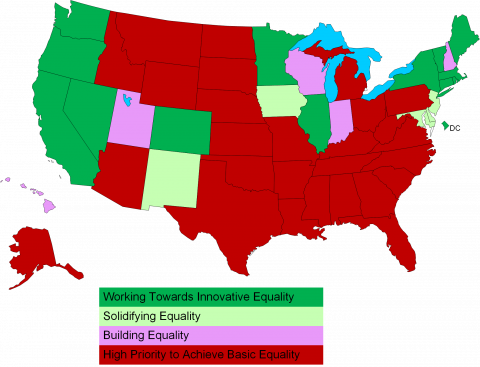 With the 2018 Legislative Sessions starting in January, the report comes at a time where there several anti-transgender bills have been introduced, especially in critical areas like health care and access to bathrooms.

Said Rebecca Isaacs, executive director of Equality Federation Institute: “Every year, the State Equality Index gives us an opportunity to share some of the victories and heartbreak from the state-based movement for equality. This year it’s more important than ever because our progress is under assault from the Trump administration, Congress, and the courts. Despite our emboldened opposition, we still have great opportunity for legislative advocacy and policy making on the ground in states where this work has a critical impact for millions of Americans.”

HRC’s full State Equality Index report, including detailed scorecards for every state; a comprehensive review of 2017 state legislation; and a preview of the 2018 state legislative session is available online at www.hrc.org/sei.

About the Human Rights Campaign