New York, NY – GLAAD, the world’s largest lesbian, gay, bisexual, transgender and queer (LGBTQ) media advocacy organization, today launched its “Amp Your Voice” LGBTQ youth voter engagement campaign, which will empower young LGBTQ people to speak up, speak out, register to vote, and then take the issues that matter most to them to the polls on November 6th, 2018.

GLAAD will launch the Amp Your Voice campaign by sending a traveling billboard across the country – from New York City to San Francisco – touring Pride festivals in major cities to raise awareness for the campaign, register new voters, and inspire the next generation of LGBTQ youth to vote. The first stop will be the BuzzFeed Queer Prom in New York City today, where GLAAD Campus Ambassador Leah Juliett and Rain Dove will be walking the red carpet, and GLAAD staff and volunteers will be registering attendees to vote.

The Amp Your Voice traveling billboard will also raise awareness of the constant attacks the Trump Administration has made on LGBTQ people since taking office. GLAAD’s Trump Accountability Project has documented more than 75 direct attacks, including ongoing efforts to ban transgender soldiers from serving in the military and revoking non-discrimination protections for transgender youth at school. 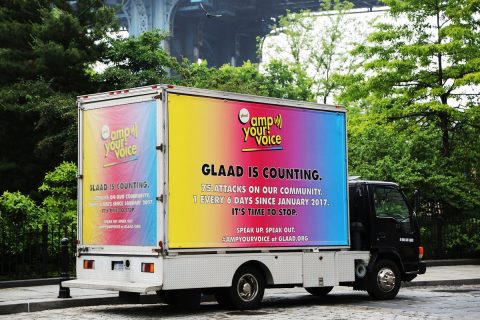 “Young people in this country are at the forefront of articulating the connection between the perilousness of their rights and safety under Trump Administration and the power of their own voices to create change.” said Sarah Kate Ellis, President and CEO of GLAAD. “GLAAD’s Amp Your Voice campaign will further empower young people, especially LGBTQ youth and allies, in their leadership roles.”

GLAAD is also launching an online action center for the Amp Your Voice campaign, where users will be encouraged to register to vote, take specific action on state and federal legislation, contact their representatives in Congress, and participate in GLAAD’s calls to action for video submissions telling us why people are energized and inspired to vote in the upcoming midterm elections.

GLAAD’s Amp Your Voice Campaign is launching at a time where LGBTQ acceptance is slipping and anti-LGBTQ violence and discrimination are on the rise in our current political climate. GLAAD and The Harris Poll’s 2018 Accelerating Acceptance Report, which measures American attitudes toward LGBTQ people and issues, showed a decline in acceptance of LGBTQ people for the first time in the report’s four year history.

GLAAD rewrites the script for LGBTQ acceptance. As a dynamic media force, GLAAD tackles tough issues to shape the narrative and provoke dialogue that leads to cultural change. GLAAD protects all that has been accomplished and creates a world where everyone can live the life they love. For more information, please visit www.glaad.org or connect with GLAAD on Facebook and Twitter.