This article is for instructions on changing sex on U.S., Canadian and other driver's licenses.

In order to change your name on your Driver's License, you need to present an original change of name certificate and your driver's licence at an Access Centre. To change your gender marker, you will need a letter from a doctor, surgeon, or psychiatrist saying that you have been diagnosed with Gender Identity Disorder and that you are living full time as your new gender. You do not have to have had surgery or be on hormones.

You can change the gender marker on your Care Card at that time as well.

Changing your name on your Ontario's License is fairly easy and there is no charge. First you must have applied for and received your Change of Name Certificate from the Registrar Generals Office. Then simply go to your local MTO license office and present the Change of Name Certificate, along with your current drivers license. This must be done within 6 days of receiving your certificate. They may even change the gender marker, they offered to in Kingston, but in other locations the staff may want proof from a surgeon, or doctor. They will take a new picture and issue you a temporary license so depending on how far along you are in transition you will need to make a decision on whether you will be presenting as a male or female.

The Driver Vehicle Licencing Authority (DVLA) issue driving licence in the UK. Applications has been tightened up since the introduction of photocard licences. Anyone applying for photocard driving licences are now asked to submit original documentation confirming their identity. After name change, a new licence will be issued free of charge unless your photograph is due for renewal, if so, the fee is Â£17.50.

UK driving licences do NOT have any Gender Identification on the licence in the form of the letter "M" or "F". The drivers gender is in code on the licence within the driver number. (field 5) 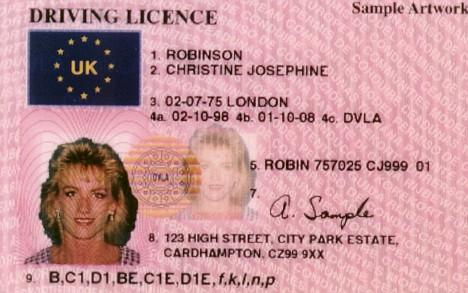 The DVLA have a seperate section for dealing with transsexuals and it is best to phone them to request a specific name of a person to send the application to. To change your drivers licence is a cost of 38.00 GBP.

Under proposed legislation, anyone with a biometric passport or ID card will be required to notify the National Identity Register of changes to personal data. While the cost of a new ID card is Â£30, most people will have to pay more.

Transgendered people will be issued two cards at the same time, one for their old identity and a new one for when they have completed transision.[1] Currently there are no penalties, civil or criminal, for not applying for an ID card, however, in the future it may eventually become compulsory for everyone aged 16 and over, who is legally resident or working in the UK, to have one.

DVLA can confirm your identity with the Identity and Passport Service (IPS) without you having to send your passport to them. If both your photograph and signature appear on the same page in your passport, then it is a digital one. If you are making an application online you will be asked to provide your nine-digit passport number allowing DVLA to confirm your identity. If you are making a postal application, using the D1 application form, write your nine digit passport number and your signature in the â€˜confirming your identityâ€™ section of the application form D1. You donâ€™t need to send your digital passport to DVLA. The fee for a passport can be found at the Identity and Passport Service website.

Other means of identification

DVLA also accepts the following documentation as confirmation of your identity. Unlike the digital passport though, you'll need to send this to DVLA with your application.

If your name is now different from that shown on the document you submit to confirm your identity, you must also supply original documentary evidence to confirm your change of name e.g. Deed Poll or Statutory Declaration. The evidence you provide must show a clear link between the name on your identity document and your current name. It will take up to two weeks for your new licence to arrive.

This page was originally authored by members of Susan's Place Wiki Staff.