A colovaginoplasty (also known as colon section) is an operation where a vagina is created by cutting away a section of the sigmoid colon or ascending colon and using it to form a vaginal lining.

This surgery is performed on females with androgen insensitivity syndrome, congenital adrenal hyperplasia, vaginal agenesis, MÃ¼llerian agenesis, and other intersexed conditions, where non-invasive forms of lengthening the vagina cannot be done and, mostly, on male-to-female transsexuals as an alternative to penile inversion with or without an accompanying skin graft for greater depth with the donor skin taken from the thigh, abdomen, or scrotum.

There appears to be little evidence that genital surgery on children/infants is successful. In the case of females with Androgen Insensitivity Syndrome (AIS) if any vaginal opening is present at all, it is preferable to increase depth via dilation than surgery, if possible.

Due to numerous potential complications most surgeons will recommend a colovaginoplasty only when there is no alternative. Persons with ulcerative colitis or crohn's disease may be contraindicated for colovaginoplasty because of complications inherent with the disease process which will affect the vagina's properties. 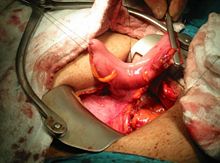 An intra-operation image of a colon graft ready for use in colovaginoplasty.

Colovaginoplasty is best viewed literally, as two separate operations taking place simultaneously. The first, a general surgery team, performs laparotomy (keyhole surgery) on the abdomen, harvesting a 15 to 20 centimetre colon interposition flap. During this time, the reassignment team performs many of the duties also done in a penile inversion, such as removal of the gonads, and corpora cavernosae. (if either are present) At this point, the general surgery team will internally hand off the colon segment to the reassignment team and secure it in place in the perineal body. And finally, the urethra is put in place, external genitalia are formed, and the patient is prepared for recovery.

The advantages to this procedure include:

The disadvantages to this procedure include:

If the harvesting of the colon segment was not performed using laparoscopic techniques, there will be a scar on the abdomen.