Hirsutism (from Latin hirsutus = shaggy, hairy) is defined as excessive and increased hair growth in women in locations where the occurrence of terminal hair normally is minimal or absent. It refers to a male pattern of body hair (androgenic hair) and it is therefore primarily of cosmetic and psychological concern. Hirsutism is a symptom rather than a disease and may be a sign of a more serious medical indication, especially if it develops well after puberty.

The cause of hirsutism can be either an increased level of androgens (male hormones) or an oversensitivity of hair follicles to androgens. Male hormones such as testosterone stimulate hair growth, increase size and intensify the pigmentation of hair. Other symptoms associated with a high level of male hormones include acne, irregular menstrual periods, deepening of the voice and increased muscle mass.

Growing evidence implicates high circulating levels of insulin in women to the development of hirsutism. This theory is consistent with the observation that obese (and thus presumably insulin resistant hyperinsulinemic) women are at high risk of becoming hirsute. Further, treatments that lower insulin levels will lead to a reduction in hirsutism.

It is speculated that insulin, at high enough concentration, stimulates the ovarian theca cells to produce androgens. There may also be an effect of high levels of insulin to activate the insulin-like growth factor-I (IGF-1) receptor in those same cells. Again, the result is increased androgen production.

One study suggests clothing may also affects the amount of hair but it may not cause hirsutism. (Polyester but not cotton or wool textiles inhibit hair growth)

The following may be some of the conditions that may increase a woman's normally low level of male hormones:

Hirsutism only affects women, since the rising of androgens causes a male pattern of body hair, particularly in locations where women normally do not develop terminal hair within their puberty (chest, abdomen, back and face). The medical term for excessive hair growth that affect both men and women is hypertrichosis.

One method of evaluating hirsutism is the Ferriman-Gallwey score which gives a score based on the amount and location of hair growth on a woman. 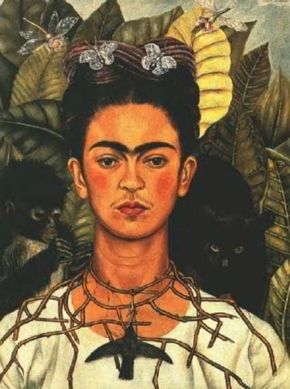 Frida Kahlo - the famous Mexican painter was fond of her mustache and thick eyebrows, and usually included them in self-portraits

Many women with unwanted hair seek methods of hair removal to control the appearance of hirsutism. But the actual causes should be evaluated by physicians, who can conduct blood tests, pinpoint the specific origin of the abnormal hair growth, and advise on the best course of treatment.