Phalloplasty refers to the construction (or reconstruction) of a penis or, sometimes, artificial modification of the penis by surgery, often for cosmetic purposes. It is also occasionally used to refer to penis enlargement.

The first phalloplasty done for the purposes of sexual reassignment was performed on trans man Michael Dillon in 1946 by Dr. Harold Gillies, which is documented in Pagan Kennedy's book The First Man-Made Man.

There are four different techniques for phalloplasty. All of the techniques involve using a free graft of tissue that is removed from its original place, rolled up, with the urethra extended in some fashion, and grafted to its new place between the thighs. A penis of up to 7 inches (14-18 cm) long with a circumference up to 5.9 inches (11-15 cm) can be created with any of the methods in this article.

The basic procedures have similarities (except in extreme cases of micro/macropenis), although surgery on cisgendered men can be simpler, since the urethra still ends in the front of the genital area, whereas the urethra of trans men ends near the vaginal opening and has to be lengthened considerably. The lengthening of the urethra is a difficult part of total phalloplasty, and also the one where complications often occur.

With all types of phalloplasty in trans men, scrotoplasty can be performed using the labia majora (vulva) to form a scrotum where prosthetic testicles can be inserted. If vaginectomy, hysterectomy and/or oophorectomy have not been performed, they can be done at the same time.

An example of an implantable erectile prostheses

Unlike metoidioplasty, phalloplasty requires an implanted erectile prosthesis to achieve an erection. (and enable sexual penetration) This is usually done in separate surgery for healing reasons. There are several types of erectile prostheses, ranging from malleable rod-like medical devices so the neo-penis can either stand up or hang down, to elaborate pumping systems. Penile implants require a neophallus of appropriate length and volume in order to be a safe option. The long term success rates of implants in a reconstructed penis have been less then the success rate in cisgendered males. Good sensation of the reconstruction can help reduce the risk for the implant eventually eroding through the skin.[1]

Earlier techniques used a bone graft as part of reconstruction.[2] Long-term follow-up studies from Germany and Turkey of more than 10 years proved that these reconstructions maintain their stiffness without late complications.[3] Unfortunately, it results in a penis that has no ability to become flaccid again without breaking the internal bone graft.

As of November, 2009, there is research being done on rabbits to synthesize corpus cavernosa (erectile tissue) in the lab for eventual use for patients requiring penile construction surgery. Of the rabbits used in the preliminary studies, 8 had biological response to sexual stimuli (from the synthetic erectile tissue) that was similar to the tissue of a (male) rabbit that was not part of the study.[4] In the future, this would allow trans men a significantly improved end result (as part of) reassignment surgery compared with phalloplasty techniques currently used today.

As phalloplasty has improved over the decades, the risks and complications from surgery have been reduced, however, there is still the possibility of need for revision surgery to repair incorrect healing.

A study of post-op men, shown that on average, 25% had one or more serious complications of the neopenis. The ones reported consisted of:

In the same study, chances of issues of the extended urethra were higher, averaging 55%. The most common complications reported were: 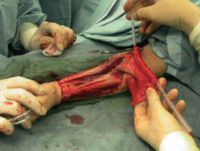 Of the four, an operation using the forearm as a donor site is most easy to perform, but results in a cosmetically undesirable scar on the exposed area of the arm. Arm function may be hampered as well if the donor site does not heal properly. Electrolysis and/or laser hair reduction is required for a relatively hair free neophallus.

Sometimes a full-scale metoidioplasty is done a few months before the actual phalloplasty to reduce the possibility of complications after phalloplasty. Sensation is retained through the clitoral tissue at the base of the neophallus, and surgeons will often attempt to graft nerves together from the clitoris or nearby it. In addition, nerves from the graft and the tissue it has been attached to may connect after a while. This does not necessarily mean an ability to achieve genital orgasm after healing as the most important task of nerve reconnection is the ability of the penis to sense injury.

The following explanation of this technique has many similarities with the others, but the details, especially in construction of the glans, is what makes the difference at the moment due to lack of research in complete penile construction. All current phalloplasty techniques require tattooing of the glans penis to simulate that of a cis males penis. 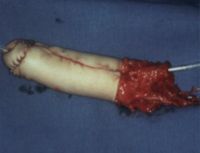 An example of a completed forearm skin graft

If the patient chooses to have the urethra extended to the glans of the neophallus, it is formed by the following steps:

Often, this is done in a separate procedure. Alternative graft locations include the mouth/cheeks or experimentally, the intestines. If the labia minora is not used during construction of the urethral extension, (or in the chance there is enough material remaining) it can be used during glansplasty to provide for better results compared with a fill thickness skin graft.

The overall aesthetic satisfaction rate for forearm phalloplasty is good (90%) in spite of it's shortcomings. The superficial (skin) sensation rate also fares well at 83% of patients who replied to a study. Unfortunately, only 9% had erogenous sensitivity in their neopenis and only about half (51%) were able to perform satisfactory during intercourse (defined as able to penetrate their partner successfully without difficulty or pain).

Post-op depression which required temporary use of anti-depressants were noted by 27% of those who replied, with one suicide attempt not related to the surgery outcome. 40% claimed ability to apply for employment they were unable to achieve as legally female after surgery. Finally, while the complication rate high, overall sensation rate mixed at best, and aesthetics in the eye of the beholder, an overwhelming 93% of patients stated that after phalloplasty, they were happy with their genitals (or in other words, felt they were complete as men).

A relatively new technique, involving a graft from the side of the chest, under the armpit (known as a musculocutaneous latissimus dorsi free transfer flap, or MLD) is a well needed step forward in phalloplasty. The advantages of this technique over the older forearm flap technique include:

This is a three part surgery that takes place over a period of six to nine months. The steps consist of:

During initial recovery, the neophallus is protected from contact with other tissues with a specially constructed dressing as to avoid blood supply complications.

And finally, after another three to six months, a (technically) optional step is done to implant a device that allows an erection.

The lower leg operation is similar to forearm graft with the exception that the donor scar is easily covered with a sock and/or pants and hidden from view. Other details are same as forearm graft, especially the need for permanent hair removal before the operation. A graft from here or another area where the scar is less noticed, may be combined with free forearm graft to sculpt the glans penis.

In 2006 Mutaf and Bulut, described a one stage surgery using what amounted to a graft from the thigh using an innervated anterolateral thigh flap.[6][7] Other surgeons have noted the benefits this technique offers compared to older graft site techniques, especially from the forearm.[8]

The graft location is around the pelvic bone, usually running across the abdomen under the belly button. As such, there is a large horizontal scar that may not be aesthetically acceptable. The grafts have a less natural appearance and may not maintain an erectile implant long term. Electrolysis is required before surgery with the alternative being clearing of hair via shaving, or chemical depilatory.

This technique was pioneered by Sir Harold Delf Gillies as one of the first competent phalloplasty techniques. It was simply a flap of abdominal skin rolled into a tube to simulate a penis, with urethral extension being another section of skin to create a "tube within a tube." Early erectile implants consisted of a flexible rod. A later improvement involved the of a blood supply pedicle which was left in place to prevent tissue death before it was transplanted to the groin. Most latter techniques involve tissues with attached pedicle.

Skin grafted muscle flaps have fallen from popularity. This procedure is a minimum of 3 steps and involves implantation of an expansion balloon to facilitate the amount of skin needed for grafting. The grafts have a less natural appearance and are less likely to maintain an implant erectile long term.